Differences in race, or at least skin colour, can add another kind of contrast and intensity.

But also African American, Argentinian (a mix of white, Indian and Moorish), “black” (ie she’s English, but her parents were from the Caribbean and most of her ancestors from Africa), Chinese, Fijian, Indian (Southern India, and the most deeply darkly “black” of any girl I’ve ever undressed), Korean, Samoan, and Vietnamese. I’m not counting Jewish and Iranian as non-white.

My observation is only that I liked all of them, and loved some. If you asked me if I had a “type” or a preference, I’d have said it was cute, curvy blonde women. That’s not not because I’d look at the room at a party and make a beeline for the cute, curvy blonde girl. It’s more that, looking back, I can see that I’ve had so many cute blonde girlfriends that it can’t be a coincidence.

Similarly, I’ve never noticed myself thinking that I prefer brown skin, or exotic eyes, or whatever. But again, I can’t have dommed that many non-white girls by accident, either. So there is an attraction there.

Carol had a dodgy confession of her own. She’d already said that she didn’t really trust black guys to dom her. And, she added, I was the only man she’d ever trusted even to spank her, let alone take a riding crop to her arse. She’d decided to play that way with me partly because she’d liked something I’d written. It was about working through my feelings about submissive women wanting to be hurt, and how strongly my parents had taught me that under no circumstances, ever, should I hit a woman.

But the dodgy part was that if I were a black man there’d have been no deal. She’d only let me tie her up and use that crop because I was white.

That had nothing to do with eroticising white supremacy, or slavery. It was about her own life. She’d experienced domestic violence from black guys, but never from the white guys she’d been involved with.

Yeah, you could give a lecture about generalising about a whole group based on experiences with a few. It’s wrong. But I wasn’t going to give her that lecture: a white guy lecturing a black woman not to be racist? I didn’t think I could carry off something like that.

Anyway, she’d made her own decisions about her safety, and that was her right. he knew me, and for some reasons that were personal and some that were awkwardly racial, she believed that there was a better chance that I’d careful and trustworthy, and not suddenly get angry or carried away.

I’m not telling you that to make some triumphant point about black guys being worse behaved than white guys. I’m just saying people have their own experiences and reactions to their experience, and life is complicated.

So we had shameful confessions to exchange. Then what?

Carol said she’d been contacted by white male doms who wanted to beat her because she was black. They weren’t necessarily wanting to re-enact slave days, specifically.

They mostly “knew” only two things about slavery: (1) they’d read in right-wing blogs and heard from their local crazy Christian right beardie that black people were better off under slavery; and (2) that they didn’t like black people, so whoppin’ “their” women was a righteous thing to do.

Because in these guys’ mindset, black people are men, and black women are an accessory “owned” by black men. Carol showed me some of her collection of their contact messages. It was horrible, creepy stuff.

The other thing she especially disliked, though not as much as the psycho racist doms, was the liberal doms who wanted a black girl because that would show that they weren’t racist. So she’d be an exhibit on some guy’s CV rather than a person.

I’d avoided that anodyne category mainly because we’d corresponded for more than a year, when I’d thought there was no chance of us ever meeting. So I’d made it clear enough that I liked her, specifically.

Also, once I’d admitted to having that moment of lust at the thought of Carol-as-real-slave, I’d moved out of the good liberal tent. But Carol had her own confession to make.

They say a Master without a submissive is a slightly ludicrous figure. Ah well, I managed to carry it off with great wisdom and dignity. Didn’t I?

Anyway, I may be on the way to becoming less ridiculous. I won’t say much else. I may be completely wrong about what’s happening. Anyway, people don’t get written about in this blog except with their permission or if the story is more five years old. So for now there may not be a lot of details.

But the tone may get happier, if I’m lucky. (Unless I crash and burn, of course. Then it’ll really get emo, in here.)

My father is very, very old. He is alive way past the usual human lifespan, so that even the youngest and the healthiest of his friends are dead.

He’s had a good life, working his way from poverty to mild wealth. He married happily, well and once. His wife, my mother, died in their home last year. His children are all well and we’re mostly happy, so he doesn’t have to worry about us. He can fill a hall with his children, grandchildren, great-grandchildren and great-great grandchildren. I know because on his 90th birthday we did.

He remembers not just the Second World War but the Great Depression of the 1930s. When he was a boy he rode to school on horseback. The school had a paddock for its pupils’ horses to graze in during the day.

Women usually outlive their husbands, but although my mother lived a long time, she died first, leaving him alone.

Old age, very old age, takes a lot away. It’s inflicted a lot of indignities on my father, who is made to shower, and helped to shower, by nurses who cajole him  into cooperating with medical things as if he were a slightly naughty boy of,oh, seven.

They know he was a man of power and intelligence. But you can’t make a man do what they have to make my father do, so they treat him as a boy. It’s their way of dealing with the unfairness of human age and frailty.

My father handles this with great patience and good humour. Though there’s not much funny about most of it.

But I  learned some things about both of us in the days I’ve been looking after him. Though I’m a Dom I have a slightly Bertie Wooster-ish notion that you have to oblige a woman. It is my duty to look after women , and as far as possible I must go along with their wishes and even their whims. Being a dominant doesn’t make this any less true, at least for me. I keep a submissive obedient and disciplined, but I try to make sure that she achieves her dreams, including frivolous ones. 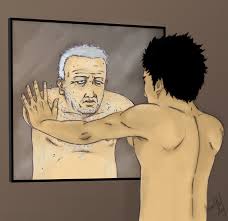 I understood this while I was looking after him over the last week. There was a moment, one morning, when my father was drinking a cup of coffee. A nurse came by and picked up his breakfast plates. But he hadn’t finished the coffee.

He saw that she was hovering, and his first instinct was that she shouldn’t have to wait for him. So he swallowed his coffee in a few gulps and gave her the cup, with a kind of ironical chivalry. She thanked him, took it and left.

Then he had a choking, coughing fit that lasted for nearly three minutes, because he can’t eat or drink anything quickly. He waved at me to close the door, so that she wouldn’t hear it and feel bad.

It was a very small thing, but it’s also true to say that he risked his life just to save a woman’s feelings. The choking is alarming and dangerous, and it may be what one day kills him. He strayed onto death’s front lawn so a woman wouldn’t have to wait, or come back later, for a cup.

By the way, there’s no blame or criticism for that nurse, here. She does a hard job well, and she doesn’t yet know how my father thinks and acts.

That automatic deference to the comfort and convenience of women is inherent to my father, and I suppose that’s why I’m exactly the same, including as a dom. I would do that mildly foolish thing myself, one day, without even thinking about it.

I have a lot to say about this. And I will tomorrow. But for now, please excuse me. I just cant.

Update: And I ran out of time. See above for the rest of the sentence that began “Carol told me”.

I mentioned in November that my mother had just died. I’m flying out to spend some time with my father. So blogging may be light for a few days.

So I confessed. Carol took it quite well, considering. She hummed something, and then asked me if I’d had to stop myself from saying, “Nigger bitch”, while I’d whipped her.

It actually hadn’t occurred to me, and I tried to explain why. My parents had thought that racism was intellectual nonsense and morally wrong – though they also had some racist views, because life is complicated. But they thought that racism, at least obvious racism, was something that only worthless people had. They’d both been poor when they grew up, and they’d made it out through education. They wanted to insulate me against the kinds of ignorance they’d come from.

One of their methods was to impose a different kind of ignorance on me. They knew that I’d hear the word “nigger”, because of the counting game: Eeny meeny miny mo, catch a nigger by the toe. They told me that a nigger was a small furry animal, a bit like a possum. Well, we lived near a forest. There were many creatures in there, and I didn’t know the names of all of them. So a nigger was some sort of nocturnal mammal that I’d probably glimpsed, some time, but that I didn’t care much about.

There was racial tension in the area. I remember stumbling across a water hole where a bunch of black kids were swimming, and they drove me away by throwing rocks at me – serious, bone-breaking rocks that could have killed someone who was bigger and not so good at dodging. I was angry at them, and if I’d known that “nigger” was a word that hurt I’d probably have used it. But I didn’t know.

So, partly because of that childhood ignorance and partly through my own opinions once I got to understand what racism is, I’ve never used the word “nigger”, inside my head or spoken aloud, in relation to a human being. It would just feel weird. It doesn’t mean that I don’t have unexamined bits of racism; everybody does. But the word “nigger” was never part of my culture. For different reasons I’ve never called a woman a bitch (except doing ironical “bitches’n’hos” routines, and I’ve chucked that in).

So I explained some of that. Carol had seen me be massively naive about various things, so she decided to believe me. She relaxed quite a bit after that.

I thought that the “nigger bitch” thing wasn’t central, and I was surprised that passing that test was so important. But it was Carol whose opinion mattered, not me.

Though it turned out that I wasn’t off the hook quite yet.