Three is a good number for a bed. When all the fucking is done and you’re warm and relaxed and tired, there’s lots of warmth and cuddles, and if you’re in the middle, as I was, there’s someone there, likely to smile at you, no matter which side you lie on. It does mean there’s no easy way of getting up to have a piss without waking at least one if your companions. But all that flesh and comfort and affection more than cancels out that problem. Anyway I was careful. 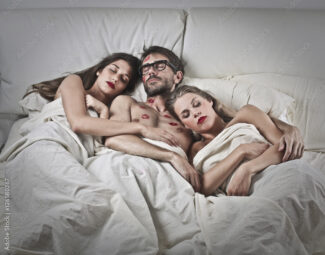 Maires likes both men and women, so she was blissfully happy, with two lovely, sexy people thinking the world of her.

Stephanie was happy but slightly less happy, because she’s about ninety per cent straight. Pleasuring and being pleasured by Maires had been fun, and sexually powerful, but it also crossed some barriers she’d previously had in her mind. She didn’t want to be a “lesbian”. She’d been brought up to disapprove of lesbian sex on religious grounds, and though she’d shed the religion, it still left traces. And, of course, there were things about the male shape, male energy, and I think our smell, that she liked a lot.

I saw Stephanie frown, lying on her side facing me, so I put my arms round her and pulled her close, crushing her breasts against my chest, then relaxing a little so she could breathe. My cock was out of service, and I expected it would remain so until morning, but I could make manly and appreciative growls in her ear. She smiled again.

She needed me to be there to make everything else possible. So I held her, kissed her and whispered that she was a good girl. She kissed be. That I thought she was a good girl was good news. I suppose her religion had never given her a prejudice against submission. In fact it had probably done the opposite. Anyway, she seemed pleased to be pretending to be at my command: so far that had been hot and then turned unexpectedly loving.

We lay quiet and still, cuddling, my leg over hers, and after a time she relaxed and her breathing slowed, open-mouthed. I waited till I was sure she was asleep and turned on my other side. 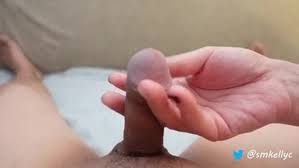 Maires was still awake. She reached down and held my limp cock, and I smiled regretfully and shrugged.

She whispered, “Dibs me first in the morning.”

I said, “Some time in the morning.”

So we kissed instead, and I reached down and stroked her cunt. Maires turned on her back, her hand resting on mine, until she came. She usually makes a lot of vocal noise, but she took care to be discreet and not wake Stephanie.

Then she snuggled in and kissed my armpit, and we murmured love-words. I don’t know which of us fell asleep first. 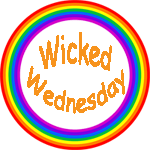