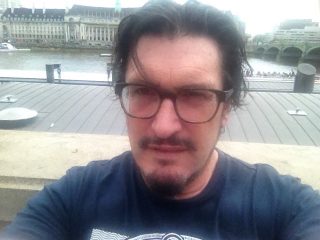 You’re at Jerusalem Mortimer’s blog Between the Lines. He wants a word, and the word he wants is … Welcome!

This blog’s been going since 2012, so there’s probably a couple of day’s worth of reading by now. So stay a while and look about.

I’m told, so it must be true, that the blog’s both sexy and funny, in roughly equal proportions. But all I’d definitely claim is that my proof-reading’s improved since 2012.

Haere mai, by the way, is a Maori phrase meaning “welcome”, when you’re speaking to several people and not just one. I’m using the multi-person greeting because I’m optimistic about visitor numbers, but mainly as the set-up for the photo caption on my picture.

There’s a new book on the way, so watch this space.

Now, here’s some of the backstory.

A tribe crunched across the white grass north of the Don, in ice-age Russia. We don’t know anything about them except that they left behind two carved limestone figurines. Both figures are women, about the size of your hand. One is naked except for the bonds holding her wrists. The other woman wears only a harness around her shoulders, that emphasises her breasts and restricts her movements.

These figurines are bondage art. They’re among the oldest surviving human art works. 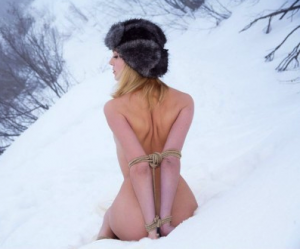 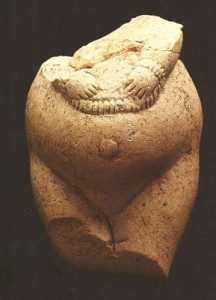 Lovesick Egyptian men were writing songs about wanting their girlfriends to boss them about and whip them. The songs went like this: 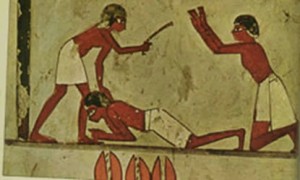 Scene from Egyptian tomb. That’s not his girlfriend with the whip, though. That’s a tax collector.

even if I was beaten

with rods all the way to Syria,

and with palm switches to Nubia

then with whips up to the mountains

and with canes out to the plains.

A collection of these poems, by submissive men who liked dominant women, was found in a jar. A very, very old jar. The British Museum has them now. Another poem goes like this: 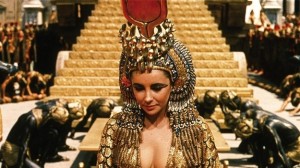 A cast of 2,000 extras grovel, while Liz Taylor tries to look imperious.

I want to be your slave.

Cook your food for you

And so on. These songs were written about 500 years before the Book of Genesis was assembled into something like its current form. After that, songs in praise of dominant women got kind of scarce for a while. Because there’s nothing kinky about patriarchy.

Rihanna (course you remember her) put out her song, S&M. It goes like this: 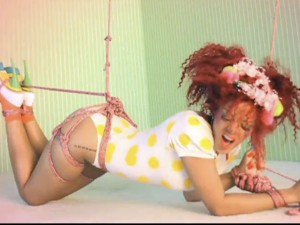 Rihanna, good at being bad, rolls around with a lot of pink rope.

I may be bad

But I’m perfectly good at it

Sex in the air, I don’t care

I love the smell of it

Sticks and stones may break my bones

But chains and whips excite me.

Jerusalem Mortimer’s book appears and the world is never the same again.