The answer us that it sounds exactly like an Arabian Night.

But really it’s a Parisian night, from the early twentieth century, put into English a little later by a London-based Welshman, Edward Powys Mathers.

Mathers’s version is probably still the most popular English-language version of “The Thousand Nights and a Night”. But he didn’t know a word of Arabic. He translated the French version by Joseph Charles Mardrus. 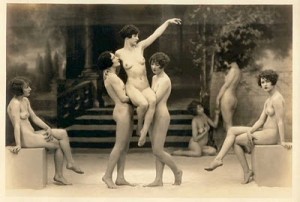 Chaste, though naked, athletics, as in the original Arabic version 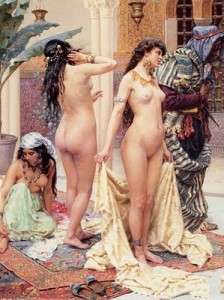 Disgruntled slavegirls demand to be in the sexier French/English version. (Painting: Giulio Rosati)

So I checked other translations, and discovered that the bondage and spanking doesn’t appear in any other translation. Mardrus and Mathers had made it up. Well, the athletics was probably enough to keep Sharkhan happily watching, hiding in his tree, but it isn’t quite so saucy for the reader. Mardrus and Mathers knew what an Arabian night ought to be like, even if the original Arabic writer didn’t.