I got a haircut with lots of colour flash yesterday, since it was my last day in New York and the US. 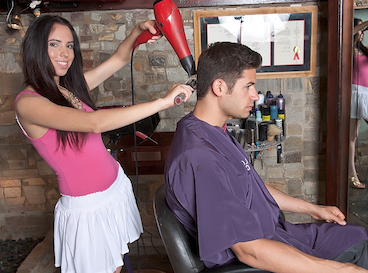 For some reason the other hairdresser, not the one who was doing my hair, thought the hair colour thing was cool, and gave me lots of eye action and smiles. I was surprised because my ego was at a relatively low level last night, but when I’d paid I invited her out for dinner and she grabbed her coat and hat. That was that.

Anyway, for reasons that were no reflection on her I enjoyed our conversion about her south American family, funny things to do with your girlfriends in New York, and so on, but there came a time when I was supposed to kiss her, after which things would move up a notch and possibly into one of our beds. But I didn’t.

I waited a little bit longer and kissed her when I was standing up. I told her she was hot, and that it was a pity I was going to have to get up so soon in the morning. And I gave her a hug, also another kiss, and then left.

So we’ll never know what it’s like to float back into consciousness beside the other’s naked body. Probably pretty good, I expect.

I slept hoping I’d dream of Gretel, and sometimes, just sometimes, you get your wish.