Even bad holidays are holidays, and holidays end. So I stood on the road with my suitcase waiting for the country bus that would, eventually, take to the airport that would take me home. My uncle and aunt waited with me, not overwhelmed with grief that I was going. Samantha was there too, not grieving either, but giving me the full force of her disdain. She was good at disdain. She wished me a good trip, going home.

So I was sadder, though not much wiser. Still, I had two new pieces of knowledge.

The first was that girls didn’t pick guys for their niceness or their intelligence or whatever. It was something subtler, that Greg had and I didn’t. He was a shit, and he was sexy. I could whine about that, or I could try to work out ways of being sexy myself, while still being me.

“Thou wilt never come for pity;

Thou mayest come for pleasure.”

If I really liked girls, and it was clear that I did, then I’d have to be someone girls enjoyed hanging around with. I had no idea how to go about that, but at least the project was clear. 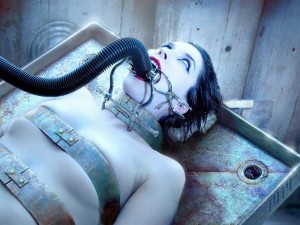 Ruth is stranger than Richard.

The other thing I learnt was even more depressing, because there seemed to be nothing much I could do about it. It was that there was no reason to think that even I met a a submissive girl, or woman, and we got on well, she’d want the same things as me.

Of course, as you know, you can almost always find common ground with a lover, and you can pervert them in your direction, and they can teach you a few of their own favourite things. I just didn’t know that yet. 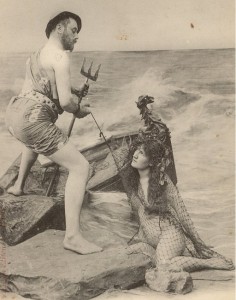 If anyone wants to identify with us, it seems to me that (except for people who advocate non-consensual practices) we don’t need gatekeepers to keep them out.

So up in that hiding place on the upper floor I read, “But Henry never understood about gloves. He’ll give a swift beating followed by sex, but nothing kinky.”

I liked that line, mostly for the outrageousness of the goes-without-saying assumption that there’s nothing kinky about “a swift beating followed by sex”. It was an insouciant joke, and though I didn’t know the word I knew I liked the style.

But there was also some bad news in it, for me. The woman narrating the story was submissive, but she dismissed her husband as an unsatisfactory lover because he wasn’t sexually responsive to gloves. 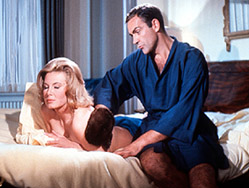 Bond effortlessly established his dominance with his purple mink glove.

I wasn’t a gloves man either, nor even a glove-fancying eleven-year old. These days I have a pair of leather gloves that I use for spanking and stroking girls who like the feel of leather a lot. But that’s more to indulge a submissive than because of any strong interest in gloves or leather on my part.

But in that shed the  gloves reference made me suspect that life was going to be even harder for me  than I’d come to expect.

At the time I wanted a girlfriend, who I imagined  as a girl prepared to cuddle me, and to talk about important things with.

I also wanted to discover all that newly appeared girl stuff, like breasts and amazing phenomena like Samantha’s arse in tight Jodhpurs. And then I wanted to feel myself in the body of that girl who liked me enough to want to take me on board.

Those were my main ambitions, and they spent a lot of time haunting my waking and sleeping dreams. They seemed hard enough to achieve. I’d just failed spectacularly with Samantha, where a completely unworthy rival – I thought – had succeeded. 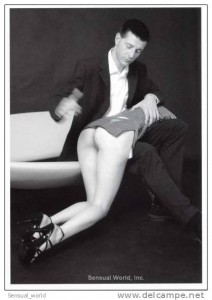 It didn’t seem much to ask.

But then there were the other things I wanted. I was a dom, though I didn’t know the word. (The only word I knew was “sadist”, which didn’t really capture what I was like or what I wanted. I’d read some Sade, and I was – and am – no admirer of the Marquis.) But I wanted to find a submissive girl, who wanted the things I wanted to do with and to her. She’d want to be spanked, that dream girl, and tied, and to kneel with her hands and ankles tied together. Waiting for me to decide what I’d do with her.

So I’d somehow have to meet a submissive girl. There had to be at least one, somewhere in the world. I hoped so, anyway.

But the gloves line taught me, suddenly, that finding a submissive girl was only half of my task, though that seemed impossible enough. But what if I found that submissive girl and what she wanted was to be dressed in tight corsets and long black gloves, or wrapped in plastic, and tied in amazingly complicated ways? I’d seen images of that sort of thing, and they’d puzzled more than excited me. What if it turned out that the submissive girl I finally met didn’t want any of the relatively simple things I wanted? What if I didn’t enjoy the things she liked?

I had to re-define my goal. I didn’t just need to find a submissive girl, which was more than hard enough: I’d have to find the specific submissive girl who wanted what I wanted, and also wanted me.

The odds against me seemed high. Quite a bit too high. Life looked, from my rickety vantage point on the mezzanine floor of an abandoned shearing shed, likely to be grim.