I’m interrupting this story because I just hit an extremely fast, aggressive and venomous snake with a spade. That might sound like a foolhardy idea, but the fact is that it wasn’t an idea at all. I didn’t know the snake was there when I brought the spade down.

It was a very blunt spade, that I was using to collect soil from an old compost heap. I’m building up an area of level ground, which I’m going to hold in place with a retaining wall. So it was no sort of a weapon for dealing with something fast and angry, with enough venom to kill a couple of hundred of me with a single strike. It’s one of the dozen or so most dangerous animals in the world, and it was sleeping under grass clippings and dried leaves. It introduced itself, after I’d hit it, by hissing and starting to uncoil.

I don’t know if you’ve ever wondered what you’d do, if you ever found yourself within a third of a metre of something deadly and angry.

I had two thoughts. The first was that I could hit it again, harder, followed by the knowledge that I’d never be able to kill it before it had bitten me at least once. If you don’t get treated you die in about 20 minutes to half an hour. The second thought was the expression “mad as a cut snake.” I don’t know a lot about snakes, but I knew that these snakes in particular aren’t known for their forgiving natures. If I wasn’t able to kill it, I should retreat.

I did. I said, “aaa-yah,” which is apparently a sound I make when I’m genuinely scared (I haven’t heard it before, I don’t think), and I backed away. Then I dropped the spade and ran. These things are aggressive, and they will pursue someone or something that’s pissed them off.

Luckily the ground, going uphill, isn’t the sort of ground that snakes like much. Lots of tree roots to drag themselves over. So I tripped over one of those tree roots, because I had slippery rubber gardening boots on. it struck at my boots, fortunately, so they were good enough for one thing.

And I got up at very high speed, and I got myself out of harm’s way. I haven’t been back to that part of the garden yet. I may have a glass of whisky.

Today’s real post will be along in exactly ten minutes. I just want to put up these pictures of lions.

And this story is a little heartless, but note the date. Tragedy plus time. Anyway, I bet you wondered. 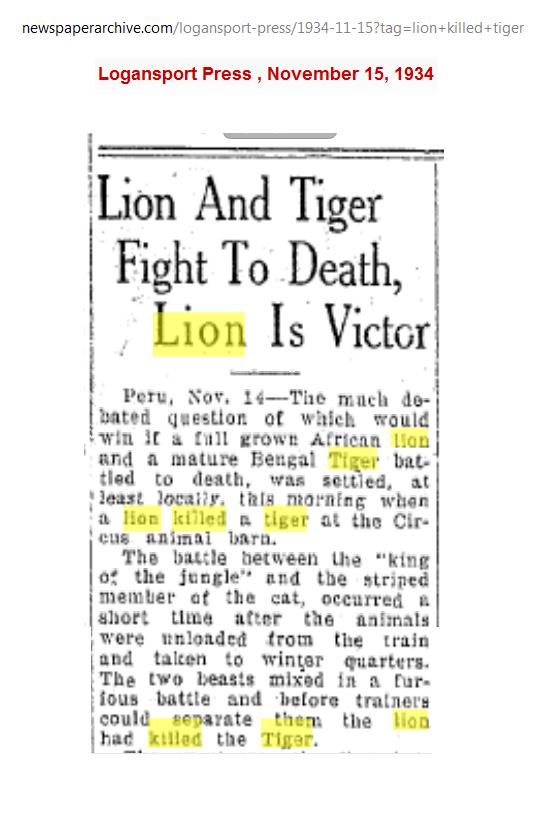 There’ll be too many leaves in the pool, which’ll be the color of strong tea. The lawn will need mowing. Trees will need felling. I’ll need to build a bigger woodshed. I’ll have to do paid work. Quite a lot of it. 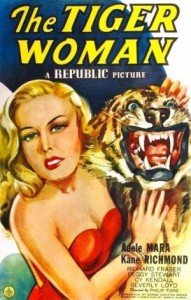 Submissive women will need to be handled with a whip and chair. I haven’t written about my travels while I’ve been having them but I’ve seen tigers at a range where they could have eaten me, a bit, if they were annoyed by the truck I was on. Or the way I looked at them.

When I was young I saw a circus with animals in it. A man with a red jacket, jodphurs and whip (probably a role model, now I think about it), put his head in their mouths, then made then roll over to have their tummies tickled. Well, I can do that. Now.

So I’m sneaking my new whip and chair past Customs. 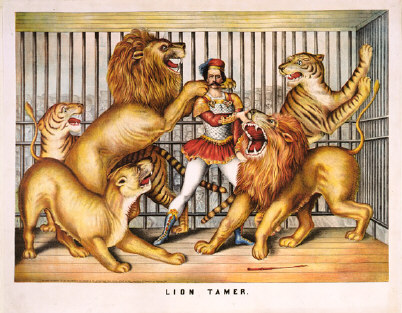 Victorian lion and tiger tamer in a body stocking and skirt: felines, he’s got felines