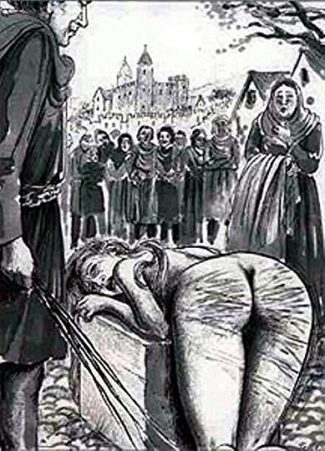 This is where she cries Uncle.

But someone writing a scenario like The Yellow Room today would probably have the dominant male be a friend of their father’s, and not a blood relative.

In a modern storyline the writer would have to make it clear that the submissive enrolled in a special school, or met the friend of her father at some social function, and was intrigued by his promises of strict treatment that she went to meet him privately.

I’ve got mixed feelings about that. Mostly I think it’s an improvement. On the other hand, there are many people who enjoy the fantasy of being overwhelmed, not of their own free will. It’s not “real”, any more than the female rape fantasy is anything like real rape. But in fantasy anything goes, so long as it’s hot. So our care not to send inappropriate messages erases one quite popular fantasy. 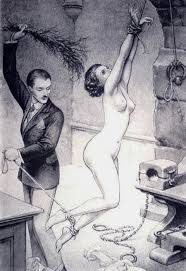 I guess overall that our current care is an improvement. But I know submissives who really do want to feel they have no choice, at least sometimes. As a fantasy, it should be allowable. Anyway, those are my mixed feelings, and they’re not the hill I shall die on.

The third thing that seems noticeable to me is blood. In the section of The Yellow Room I quoted, it’s mentioned quite early in the proceedings that the lovely Alice’s bottom is bleeding, under the birch.

I took out the bits where the blood sprays round the room, and trickles down to the floor.

Actually, Alice’s bottom spend many lines bleeding, in some volume, and felt I had to edit most of the blood-flow out, because I think for most people – certainly including me – it would be a turn-off rather than a turn-on.

I once wrote about how hard you have to birch someone to cut their skin, because I did that, once.  To draw even a spot of blood you have to whip like a maniac, and though I can be strict, that’s a level of discipline I’m just not comfortable with.

However, the Victorians loved it, both first-person submissive accounts, and from the flogger’s point of view.

By comparison, we moderns are a bunch of softies.