Your author is too busy to auth today. But here’s something from an anonymous Victorian filthmonger. The lovely Alice has been sent to stay with her uncle, who wastes no time in making her accept corporal punishment and the mild humiliation of being chronically underdressed. Probably not “mild” humiliation, really, for a Victorian miss.

Here Alice is being birched by her uncle, while her cousin Maud, already fully submitted to him, counts the strokes, and strokes her uncle’s cock under his kilt, to encourage him to keep the strokes hard.

Maud’s even voice continued to number the strokes, and she herself seemed aflame; the sight of the agony her uncle was inflicting seemed to excite her sensuality to an extraordinary degree. Her lips were moist, her eyes swam; the eyelids dropped and all the indications of a very lovesick girl appeared in her. 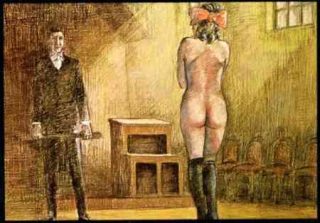 Alice’s bottom, now bleeding, her tightly strapped limbs, her piercing cries, and the relentlessly inflicted punishment excited her strongest passions. She could have torn Alice limb from limb, and she encouraged her uncle, by rolling his balls and pulling squeezing his prick, to continue the punishment in the severest manner.

She gloated over the numbers as she called them out. 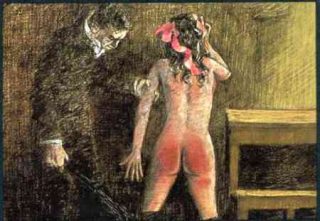 Sir Edward, too, seemed beside himself. His eyes as two flames, he watched every motion of Alice’s body glossed upon all she displayed, and lacerated her flesh with the rod yet more severely as his organ, already excited to an enormous size, was still further enlarged by Maud’s hand.

At length, Alice’s lower bottom having been well waled from left to right, as well as from right to left, there remained but the nine strokes to be given lengthwise.

For these, Sir Edward took the third birch from Maud, who by this time was standing with her legs wide apart, uttering little sounds and breathing little sighs of almost uncontrollable desire.

The unhappy Alice’s cries had somewhat lessened, as the birching had been so severe that her sensitiveness to it had been much diminished. But now, feeling the birch rod curling round her cunt, which being all open and wet, was more than ever exposed, she yelled in a perfectly delirious manner.

[To be continued next week.]