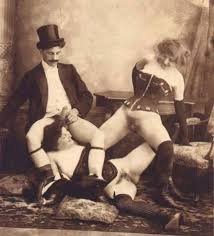 You can leave your hat on…

Here’s an extract from Pleasure Bound:

“Mr. Silverwood blinked. Little Miss J was very, very pretty, and the ankles which had made him feverish in the twilight on deck, were now supplemented by deliciously-proportioned calves, which swelled up in graceful curves to delicately moulded knees, not quite covered by the lace frills of the pantalons garnis des rubans ecarlates. There was a little bare, pink flesh above each garter which made the Chicago multimillionaire delirious.

Miss J had a very dainty china-shepherdess skin tint, obviously her own, blue and very bright eyes, naturally her own, and a mass of bronze hair which was open to doubt-at least, so Mr. S decided as he noted the gap in the little darling’s drawers which disclosed a forest on her Mount of Venus which was quite a different tint.

She caught his eye, and, with a cheeky grin, put her two bejewelled hands between her thighs.

‘Hullo, hullo,’ she giggled, ‘I know what you’re thinking.’

‘You’re thinking, either my head, or my-what ma’s got-is dyed.”

But Mr. Silverwood didn’t care whether Miss Jepps’s hair was dyed or not. His whole body flamed with desire; he seemed to swell all over, and the buttons on his trousers strained at their cables. He sank on the floor by the side of Miss Jepps and flung one arm round her knees and the other round her waist, pulling her down on to the soft carpet.

Miss Jepps made no protest. She opened her mouth to let his tongue run in between her ivory teeth and laid her pretty bejewelled hand on the throbbing swelling between his legs. Mr. S nearly went mad.” 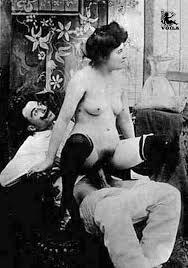 Somehow, the sexiness up and flew away…

So the prose style is a sort of wordy jocularity, like a lot of not very good Victorian humorous writing. As a result I defy anyone to be aroused by the saucy situation in that extract.

Though it’s nice to remember that drawers were once quite like to reveal pubic hair if the lady sat facing you.

It’s much better written, and it retains its hotness better, than Pleasure Bound. But it’s still an extremely interesting interesting source on Victorian kinks.