Jennifer had her side to me, hands hovering about the hems of her panties. She’d seen herself in the glass of my cabinet, and the glowing red of her bottom had embarrassed her. Confused, she turned to face me, panties still around her lower thighs. Her face flamed redder, once she’d forgot the warm ache in her bottom for long enough to realize the vision she was presenting me with.

Her eyes asked me the question. I said, “Yes, you can pull your panties up now, Jennifer. And let your skirt down. It’s over, girl. For now.” 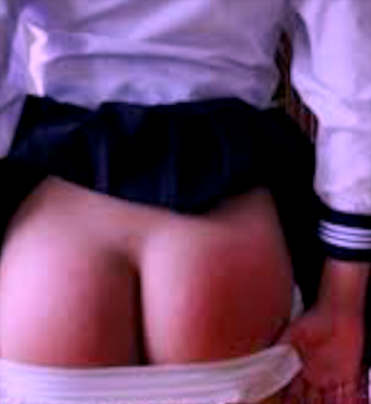 I picked up the wooden chair I’d been sitting in while she was over my knee.

I put it back in the corner, and turned in time to glimpse that perfect little pouch, snugly cased in white cotton again, before her skirt dropped, cutting off that vision.

Like a curtain falling. The show really was over.

I sat in my office chair behind my desk and watched her.

She had her eyes on the floor while she fumbled her jacket back on. For a second she hesitated over the buttons. She was feeling naked, exposed. She thought better of it and dropped her hands to her sides. The silence lengthened. Eventually she looked up and met my gaze.

She was startled. She’d thought this was over and she’d be allowed to retreat. For some reason she raised her hands to her tousled hair, horrified about something, but she dropped them again.

She said down on the leather armchair I used for interviews with parents and, it seemed, just-been-spanked girls. She sat, the skirt halfway up her thighs. then shifted slightly. The skirt rode higher. Even a soft chair was reminding her that her bottom was sore, and the cool leather was contrasting with the heat of her bottom and upper thighs.

I was sure she’d remember that detail, perhaps tonight, one-handed and wet-fingered in bed. Lying on her stomach, I imagined her, bottom rising and falling while she gasped and moaned. Until she froze, arched, then moved again, spasmodically, as though she were being kicked. I wondered what her orgasm noise was like. I realised it was on my fucket-list: I wanted to hear that moan for myself.

I said, “So, Jennifer. You’ve been spanked for some very stupid behavior. Thinking you could get away with cutting classes. That was stupid. But you’re not stupid. So why? Do you like getting spanked?”

That was a dangerous question, pretending innocence. She pretended too. Mouth slightly open, eyes wide open, shaking her head. I repressed a smile.

I considered asking, “Are you sure?” To watch her denial some more. But the comedy was good as it was. “So that’s the skipping classes dealt with. Right?”

“So you thank me for your lesson.”