Chrysothemis finished her song and burst into tears – which she did beautifully; it was Clare Watson from the Solti recording – and I took the recording off before Clytemnestra turns up. I put on Don Giovanni instead, just the tracks with Zerlina. I’ll explain why some other time. And I made another cup of tea.

Ana’s probation sessions with me were on Wednesday afternoons. Unless she came in early, and I thought she probably wouldn’t, I wouldn’t see her for another three days. In the meantime I had other clients. There was a woman who’d tried to hold up a chemist with a syringe of her blood. She needed subsidised housing if she was to have any chance of getting her children back from foster care. She was off drugs, and she was probably a better bet for her two children than foster care, where the kids were miserable. Their life would only be marginally better with their mother, as far as I could tell. But margins were all she and they had.

There was Rodriguez, who had a soft, humorous manner and the saddest, gentlest, wisest eyes I’d ever seen. It was impossible to spend time with him and not like him. But Rodriguez had been at a party where he was nearest to the man who happened to announce that the beer keg was empty. He’d beaten that man almost to death, and then used the top strand of a barbed wire fence to slash his stomach open. He’d left the man broken, draped over the wire fence. Somehow the man had survived, so that Rodriguez wasn’t a murderer.

I still have no idea, no clue, no insight, no guess, into why that apparently gentle man had done that horrible thing. Rodriguez had served his prison time for it. I’d recommended that as a condition of his release he have to do anger management courses, and that had been accepted. I didn’t think anger management courses addressed whatever the hell had happened, but no-one, including me, could think of anything better. He’d skipped his course last week. If he skipped this week he’d go back to jail. So on Monday I’d have to find him and talk to him. 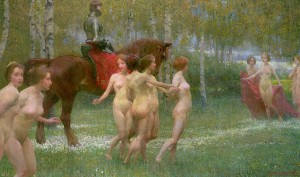 A man holding his lance, though he’s not doing the flashing. The painting is The Knight’s Dream, by Richard Mauch.

And there was Lance. The flasher with the ridiculous name: Lance Holder. (The names I give in this blog are never real names. Lance’s real name was a ridiculous name for a flasher to sport, but it wasn’t Lance Holder. Or Dick Wagger. But you get the idea.) Maybe because of the comedy name and the fact that he seemed to be physically weak and extremely timid, I wasn’t yet as worried about Lance as I should have been. 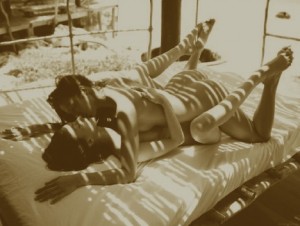 So that’s what I thought about once Sa’afia left. When I’d had dinner, and got everything ready for the working week, I went back to bed. I needed an early night’s sleep.

In bed, drifting to sleep, I thought about Sa’afia’s breasts. And then Ana’s ass. And then every centimetre of both of them. I dreamed about them too. Sometimes dreams are kind.