A few minutes later, I was looking down into Sa’afia’s eyes. Her knees almost touched her breasts, and she made a little “hooo” noise each time we closed and took each other deep.

She kept her eyes open and on mine while we fucked. There was a kind of anguish, perhaps pleading, in her brows and mouth.

Because of the conversation we’d had, in which she’d urged me to spank Ana, helped along by wishful thinking, I had the sudden conviction that if I reached down and smacked her buttocks and the backs of her thighs while we fucked, firmly enough to resound in the room, to mark her and hurt, I’d get an astonishingly strong, ferociously excited response. If I growled at her and held her down, she would come, hard, from somewhere deep in her gut. I imagined her a little embarrassed by her response, but responding just the same.

This might have been completely misreading her, and it might have been a true intuition. Anyway, I didn’t act on it. Consent can be complicated but that wasn’t: I didn’t have consent. But the thought had excited me and I fucked her hard until Sa’afia came, noisily enough. She still looked earnestly up at me as though I was torturing her. I was sure I wasn’t. 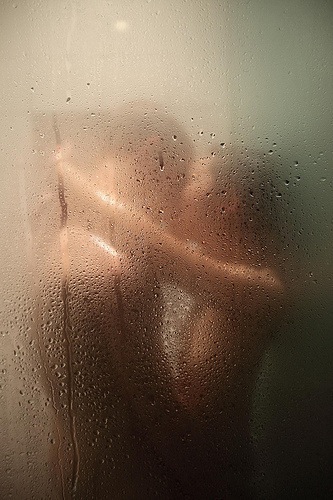 Afterwards I followed her into the shower, soaping under her arms as an excuse for holding her slippery breasts, and we cuddled while the water pelted down. We agreed, getting dressed, that we’d see each other again soon.

Then I drove her home, so she could get changed and attend the day’s second round of church. I stopped my ludicrous old van a couple of houses from her home, so her mother didn’t see her climbing out of a vehicle that couldn’t possibly be passed off as something a woman might own.

At home, alone on a Sunday afternoon, I made myself a cup of tea.

I put on Strauss’s Electra, and listened to Chrysothemis’s song. Chrysothemis, Electra’s sister, sings about how she doesn’t want to be in the middle of a lot of events, or do any fighting, or kill her ghastly mother, or do anything strong or dramatic. She just wanted to make babies and make a nice, safe home.

Ana and Sa’afia were both, in their different ways, dramatic women. Just then, I identified with Chrysothemis: I wanted a quiet life, and I knew I wasn’t going to get one.