Workplace gossip is great, but I didn’t want to be in it. So we walked a way from the office to get lunch. My colleagues were short-range browsers, so four blocks was enough to be safe.

I led Ana to a back table in a sushi booth, done in the very best Japanese kitsch. It was as kawai as baskets of puppies with enormous eyes and white cotton panties. Ana was an entertained as I’d expected by the Disney castle with the electric-powered boat towing little barges that went round and round the moat, each barge carryng a little dish of something weird. 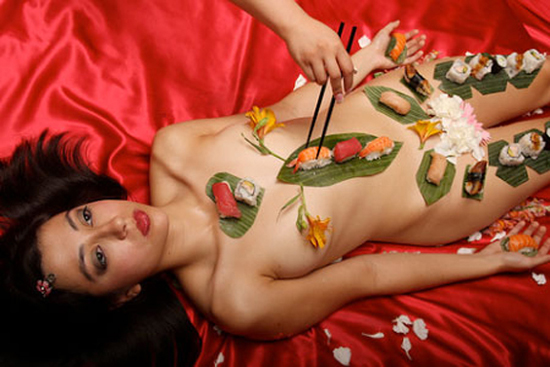 Not a sushi train. Or boat.

I’d expected her to stick to the crumbed prawns and other Western-friendly boy-food, but she tended to the cephalod and seaweed end of the spectrum. So we ate, and talked about harmless things, while she wanted to talk about being in love with me, and I wanted to ask her if she happened to have sucked my cock recently.

Eventually an English girl, probably on a backpacking holiday, cleared our plates and asked if there was anything else. Anna made to get up. I gestured for her to sit down again. “No, let’s talk.”