Sa’afia woke me about six, an hour before the alarm was due to go off. I wasn’t so keen to wake, but Sa’afia was keen to have me up. She sucked me mostly hard, with none of the tenderness of earlier that morning. I was generally happy to be sexually attacked by a lover, but god, that had been only three hours ago. 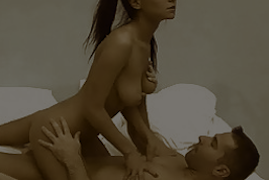 When I was hard enough she straddled me, lowered herself, with her hand holding my cock, lining it up so that when she sat, which she did quite abruptly, we were joined. We both grunted at the moment of contact. Sa’afia rode me, her eyes half-closed, her expression focussed, inward, almost grim.

Being fucked is so pleasant that it wasn’t until she was close to orgasm that I realised I was being hate-fucked. Sa’afia was angry with me. I couldn’t see why she was angry, but I knew that if I didn’t stop this while we were still fucking we’d have a day, at least, of me asking what was the matter and Sa’afia saying nothing, contemptuously. Because I shouldn’t even have to ask. And so on. So I said, “Open your eyes, girl. Look at me.”

“Yes, sir.” We did some adjusting, staying connected while Sa’afia moved her knees so instead of straddling my hips she lay on top of me, so her nipples brushed against my chest. I kissed her and she didn’t really kiss back.

It’s not that I disliked the position Sa’afia had chosen, or that Sa’afias wasn’t allowed to initiate sex or set the position or the pace. It was partly that I don’t think, as a general principle, that the angry person should be the one who gets to say what happens in sex. In the context of our relationship she was being disrespectful, and she wasn’t allowed to show disrespect. She preferred not to be allowed. If I didn’t care, we’d slide apart.

But I held Sa’afia, hard, so that she could still ride on me, but the driving force was my hips. I thrust up into her, and she bounced on my cock. Pleasant time passed. Sa’afia was back with me.

When she was close to coming I pressed my left forefinger, experimentally, against her sphincter.