But the time came when the princess awoke again, with her prince’s leg over hers, still her beautiful man even with his face slack with sleep and his mouth open. The last trickle of white juice on her hip had dried. He had released it onto her after he had softened slowly inside her and at last withdrawn. She moved carefully away, letting his leg slide off her and onto their down and silk marriage bed.

The movement reminded her that her hips still hurt, from the violence of his grip as he’d held her and bucked into her before he came. She smiled at the memory and kept still, waiting until the prince’s breathing returned to normal and he seemed deep asleep again. Then she carefully arose, as she felt compelled too do, and walked noiselessly down to the kitchen.

She took off her ermine and satin robe and stood there naked, glorying in the cold and grimy air. She caught a glimpse of her naked reflections in the shiny metal of a row of pots, and paused, looking back. The marks the prince had laid on her buttocks and thighs with the riding crop the last time she’d come here had faded. If she didn’t know where to look they would be unnoticeable.

She should feel pleased, she thought, that her skin was again immaculate, and that the prince had been happy with everything in her person and her behaviour. So why did she feel disappointed?

She opened the kitchen cupboard where she had stored her old, ragged dress. But then she started, shocked, as the prince’s hand caught her wrist.

“Ah!” She turned, and stared at her husband, mouth open. He had been feigning sleep, when she left their bed. He was naked, and erect. He held the cane in his hand. He’d looked at her, with meaning, when he’d put it into her wardrobe, but he had not used it.

“My prince?” Usually he was smiling when he found her, as though they had been playing cat and mouth, and the cat had won again. As it inevitably must. But this time there was neither triumph nor anger in his expression.

He pulled her to the kitchen bench, pushed her until the edges of the wood bit into her upper thighs. Then he pushed her down. The wood was hard and cold under her stomach, then her breasts and her face and arms. She shivered, not entirely because of the cold.

“Don’t move. Stay down till I say you can get up.” His voice was stone, like his face.

But he interrupted. “Why doesn’t matter. Doesn’t matter at all, any more. Now, if you want to stay married, stay over this bench.”

Then she felt the first stripe of the cane, a line of fire across her bottom. She said, “One, thank you.” Her stepmother had taught her to say this for her more formal beatings, in the house she had left when the prince found her. 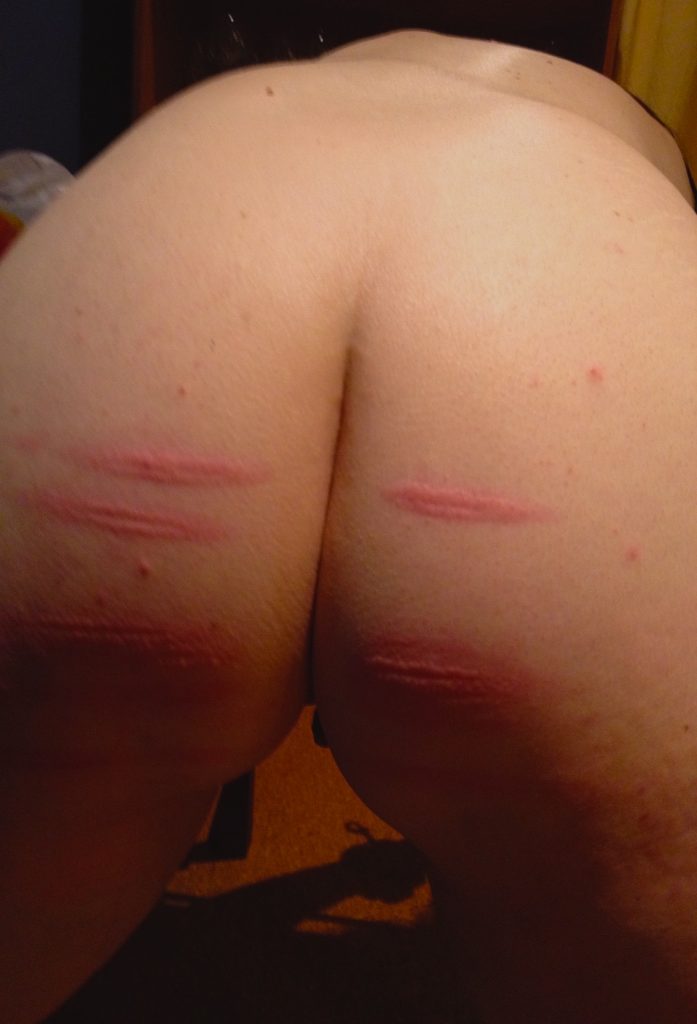 That shadow on the ground between her legs is my own hand holding the cane. I’m quite pleased with that.

There was a brief pause. She wished she could see his face. What had he meant by “if you want to stay married”? She loved him. She was his. She felt it in her head, in her heart so much that it hurt, and in her cunt. And now in that pain filled, burning line across her bottom.

“You don’t speak, Cinders. Later, you’ll want to cry out, and you may.” His voice still seemed expressionless.