Adults who spank children usually believe they’re behaving responsibly. Most certainly don’t believe that they are acting sexually, either from their own or the child’s perspective. 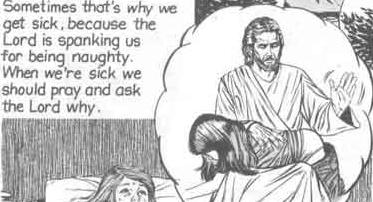 See? Jesus prefers to  spank little girls with their pants down, and there’s nothing weird about the Lord! My sweet saviour is not a pervert!”  (Illustration from US Christian right pamphlet)

The anger that’s tied in with denial is understandable, in a way. There’s huge cultural and emotional investment in child-beating, reinforced, in many cases, by religion.

Most people who beat their own children, or who support the idea of their and other people’s children being beaten in schools, had parents who beat them, or allowed their school to do it.

So pointing out the sexually abusive aspect can seem like an attack on their parents.

Worse, once a parent has beaten a child, that parent will find information about the sexual aspects of “punishment” incredibly confronting. They have strong feelings about child molesters, and they don’t like to think of themselves shading into that group.

On my side, my feelings about any adult who hits a child with a strap or piece of wood or bamboo tend to start with anger. And contempt. And get stronger from there.

And yet, it’s not helpful to think about this in solely emotional terms. Most, as in more than half, of physical assaults on children are not perceived as sexual by either the child or the adult. I think that people who hit children are wrong for a number of reasons, but in most cases they’re not “abusive” in the tabloid media sense.

So, most of the time, the job is to educate people, not to shame them.