Sa’afia was in the kitchen. She had her back to me. Her bare back. I stopped at the end of the corridor to stare at her. A dark-golden girl. Sweet thighs with just a trace of plumpness, and a very slight tremor in the muscle just under the crease of her left buttock. Gorgeous ass, with a swimsuit triangle of slightly paler skin contrasting with the tanned skin of her back and legs.

She had her hands on her head, so I could just see the swell of the underside of her left breast.

She must have heard me coming down the corridor, though I’d tried to be quiet when I approached. But I was sure she hadn’t had her hands on her head all the time she was waiting. Other girls who enjoyed being bad girls, or at least being treated as bad girls, had told me that holding their arms in that position starts to hurt at about half an hour, and burns after about an hour.

I appreciated that it was costing her some effort not to turn around. My silence was unnerving her. 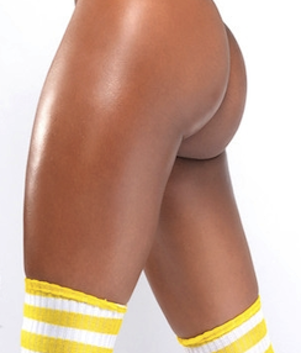 Sa’afia had brought out two things to set our agenda. There was some sort of rod on the table, thicker than I expected, wood rather than rattan or cane. And she was wearing a pair of bright lemon-coloured socks. The socks were to disobey what I’d told her on the phone, that she had to be naked. The horrible dayglo-citrus colour was to make sure I noticed, and to make it clear that I was supposed to notice. And the rod meant what it meant.

It crossed my mind to say something amused about the socks, something playful and reassuring.

But I stepped forward suddenly, without having formed any conscious intention, and put the flat of my left hand on her lower belly, where the top of her pubic hair would have been. Sa’afia was a waxing girl. With my right hand I pushed her shoulders gently so she leaned forward, slightly bent at the waist.

Sa’afia looked at my face, and I nodded. I didn’t know what I meant, but she did. Then I smacked her bottom, hard, watching her eyes. She held her face turned to mine but she was no longer really looking at me. She was focussing on sensation now, not on the visual world. I watched her mouth for the little movement she made when I hurt her a little.

And, with real force, I smacked her again.