I’d also said that Ana was only just beginning to understand that she was beautiful. That was true, but it presents me as a man of the world, observing Ana benignly from some secure vantage point in my own life. And that was bullshit. At 23, I was five years older than Ana, but except in having some knowledge about how the institutions of power worked I was hardly any more worldly.

We were both faking sophistication as hard as we could. We each saw through the other, more or less, and neither of us saw through ourselves. One thing I had no idea of was that Ana could be attracted to me. Like her, I was good-looking and had little understanding that this was so. 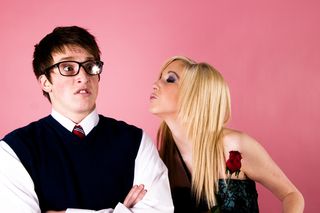 This was lucky, because if I’d known I’d probably have been vain about it, and that would have cancelled out my advantage. Instead, I found that girls sometimes worked their way into my bed without much effort on my part, and while I liked that, it puzzled me. It didn’t seem to be something I had any control over.

When I tried to charm a girl into bed I seemed to be less successful than when I just let her make the running. At some time, she’d put her face near mine and wait. I’d understand that I should kiss her, and I’d take the lead from there. My unawareness could be irritating but it could also be endearing. Ana liked me better, and fancied me more, than I realised.

So the games she began made no sense to me. But they were highly entertaining, and sexually interesting, to her.