Ana stood naked in the corner, her nose to the wall and her hands on her head. She tried not to jiggle with nervous energy while I watched her slender back. I’d told her once to keep still, and she knew I’d reinforce that order with a hand across her bottom if I had to repeat it. But she couldn’t keep still. It wasn’t her natural state.

Her bottom was smaller than Sa’afia’s, apple-cheeked where Sa’afia was a little riper and softer: a mango woman, perhaps. Sa’afia had graced that very same corner in the same posture, just a couple of months ago, so it was hard not to compare them. It’s important not to be original about rituals. Ana wanted to experience submitting, and that meant I had to put her into settings in which she knew the meaning of the postures she was told to assume, and the time she was made to wait

I’d pulled over a kitchen chair, because it had no arms to get in the way when she put herself over my knee. I pretended to read while I waited, but most I watched her. Ana bounced on her heels and twisted from side to side. She hadn’t dared glance back at me, since I’d threatened to take my belt to her if she did, but she would if I left her much longer. 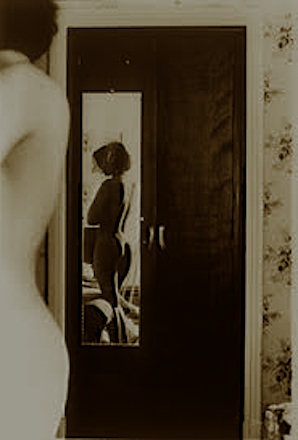 She’d had her first order, when I’d told her to strip, and her first punishment, when she’d stopped before she took off her bra and knickers. I’d grabbed her arm without warning, and – ignoring her protests – smacked her bottom, hard, about twenty times before telling her to get naked as she’d been told. She’d liked those things, I knew. And she’d had no hesitation in stripping properly naked, once I’d spanked her.

But what had dropped her, properly, into submission was seeing the blank look I’d given her when she’d complained that her spanking had hurt. As if I couldn’t even imagine or understand that she thought it mattered if she got her bottom hurt.

I’d been acting, of course, but she’d stared and swallowed once she understood. It seemed she liked being in a world where she did as she was told, and she could tell herself that she didn’t matter.

So Ana waited, with goosebumps on her shoulders and down her flanks. I turned a page on my book, letting Ana hear it. But I was thinking about the stick that Sa’afia had given me. It was a fearsome implement, and we’d had a lot of pleasure from it. Should I use it on Ana?

It seemed a kind of unfaithfulness to Sa’afia to use it on her cousin. On the other hand, Sa’afia had married another man, and she was gone. Perhaps notions of faithfulness didn’t apply. I wasn’t sure. Anyway, Ana had waited long enough.