But eventually the dinner broke up. I’d hoped Svitlana would stay on, but when people were filing out she left with the dyke couple. I’d expected a phone number, or at least a meaningful glance, but I got neither. Maybe I’d been mistaken. There was a guy who usually stayed on and drank my whiskey and talked, if I was alone, but he had people to see.

So I was alone by half-past eleven, I put on the cello sonata again to see if I could hear any Slavic soul. Till then I’d just thought of it as music, rather than Russian music, and rather dry music at that. But now Svitlana had mentioned it, there was a kind of accent there: Eastern cadences, and a kind of sadness in the harmonies even when the melody line seemed to be cheerful, or academically unemotional.

A little after midnight there was a knock on the door. I hadn’t expected Svitlana back, but it was unlikely to be anyone else. I let her wait, because I wanted to fuck her and I had an idea about what might seal the deal. Whether or not Svitlana was supposed to be a dyke. 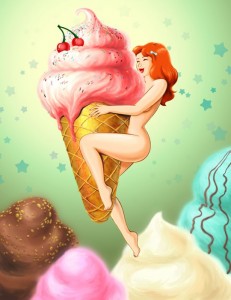 I grabbed a small plate and stacked it with ice cream from the freezer. It wasn’t that food would make her decide to fuck me; it would be that I’d started with a completely ridiculous gesture. So I opened the door with the ice cream plate and a heaped spoonful pointed at whoever happened to be there.

Of course it was Svitlana, looking cold and nervous, since she was a woman approaching a man after midnight and risking rejection or other kinds of hurt and harm. But she giggled uproariously when she saw the ice cream. When she recovered she looked at me with utter disbelief. So I scowled at her, raised the spoon to her mouth and said, “Open”.