I should tell a story about that girl I mentioned, who’d come to bed with me after a couple of years of only bedding other girls. I introduced her into Ana’s story to quote her on doms: that we – figuratively – kept our clothes on during sex, that we got other people off for the pleasure of taking away their self-control, but we never let anyone see us out of control.

As I said, I thought this was mostly unfair but that there was some truth in it. But it seems rude to introduce her in the middle of someone else’s story, use one of her ideas, and talk about nothing about her except the way she had sex. Actually, her name was Svitlana, and she was a Ukrainian woman studying feminist architecture at the local university. I met her because I was holding a dinner for some political activists working on homelessness. A couple of dyke friends brought her along, since she didn’t know many people in town, and she’d just broken up with a friend of theirs.

About halfway through the dinner I put on a Shostakovich cello sonata as background music, but about four minutes into the slow movement Svitlana had burst into tears. When I asked what was wrong she insisted that she was very happy, and the music reminded her of home, in Odesa. Shostakovich was Russian, not Ukrainian, but he had Slavic soul, she reckoned.

Both my parents are Irish, which would give me an excuse to get maudlin on St Patrick’s Day and curse the English if I wanted to, but I just can’t give a fuck about that kind of thing. People sing rebel songs and I’m unmoved except by angry contempt for anyone who romanticises the IRA or the Orangemen. And Oscar Wilde might be a contender for greatest Irish writer but he wouldn’t get in the Top 100 English writers. Fuck the Oirish soul. Fuck the Slavic soul. Fuck all nationalist mysticism with a live, angry hedgehog, wielding a chainsaw.

So I listen to Shostakovich without fussing about his Slavic soul. After the sonata was over I put on John Fahey, and Svitlana dried her eyes. 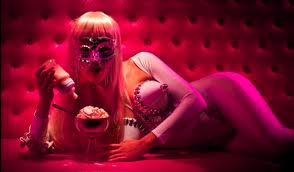 But we’d noticed each other. She had flaming red hair and skin as white as milk, but brightly freckled. She ate with enthusiasm that explained the voluptuousness of what I could see of her body, under layers of jumpers and scarves. It was a cold night in my town, that night, even by Odesa standards.

All her jumpers had vee necks, and she pointed her cleavage at me and leaned forward quite often in the rest of the evening. She could eat all the desserts she liked, as far as I was concerned.