I let Sa’afia and Ana in to my apartment. I locked the door and then put the chain on. I don’t usually bother but I thought Ana would like to see it done. The world was shut out so it couldn’t get in, or not without a warrant or a sledgehammer, or both. 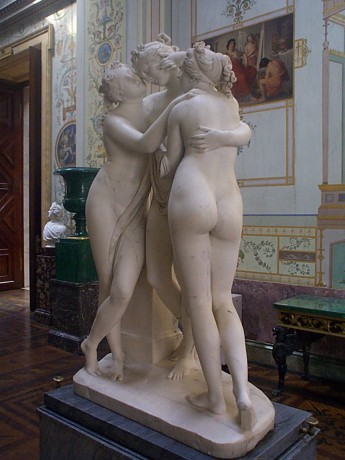 Then we formed a three-way hug. We were like those statues of the three Graces embracing and dancing, except that one of the Graces was male, and he had his hands on each of the girl Graces’ arses.

We made noises like nuzzling animals, and with that I think we became lovers, in some sense, the three of us. It was a complicated kind of love. Sa’afia wouldn’t have sex with Ana, since Ana was a cousin, and a girl. I didn’t think that Ana objected much to having sex with girls, or cousins, or girl cousins, but she wouldn’t want to do anything that Sa’afia didn’t want.

Though I wanted both Sa’afia and Ana, I needed to not fuck Ana. Not fucking Ana was important. I’d done so many stupid things and I was hanging onto what I still tried to think of as my professional ethics, though by the skin of my teeth. I’d decided that if I got through tonight, then I’d made my stand and I’d still be more or less a professional. So far.

Ana nuzzled in closer and kissed my neck. Then she squeezed my ass. I felt my cock stretch, and harden. Then I spread the fingers of the hand I had on her ass. I was exploring, loving the curved firmness of her.

I did the same, a fair and just king, with Sa’afia. She sighed too. Both girls pressed against me, so I was in a world of breasts and bellies and thighs, and thick black hair that smelled of apple shampoo and skin that smelled of chilli and cocoanut and soap, and two beautiful faces.