By the way, Tynan’s Diaries were published a few years ago. I read them after they were remaindered. Whoever thought they were worth printing didn’t do the man’s reputation any favours. On a day-by-day basis Tynan comes across as silly, self-satisfied and a bit boring. He must have been more interesting in person than he was on the page, or they wouldn’t have put him on television so he could say ‘fuck’ to everyone. 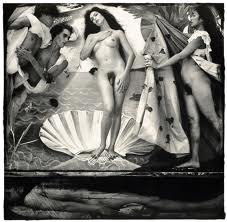 This happened because a theatre manager – Mr Crommer, of The Windmill Theatre in London’s Soho district, pointed out to the Lord Chamberlain that he couldn’t logically say that he thought nudity itself was indecent. If he thought that, he’d have to ban nude statues and paintings. 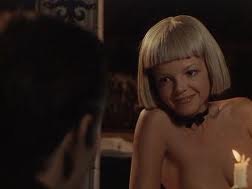 A still from the film “Frank and I”, also released as “Lady Libertine”. The film includes a scene in which the hero, Charles, visits a brothel and is shown “tableaux vivants”.

Therefore the Lord Chamberlain couldn’t consistently claim that nude actors on stage was indecent: it must only be indecent if the actors did what actors usually do: walk around, talk, do stage “business”.  So British stages were allowed to present nudity, so long as the naked girls were perfectly silent and still, as if they were statues, or the human figures in a painting.

The rule was that if the performers moved or talked, the performance was obscene, but if they kept still, it was artistic.

We are working our way back, I promise, to the night of Sa’afia’s punishment.