The first time I went to a pub I was 17. I was breaking the law by being there, and I expected it to be incredibly adult and decadent. The funny thing was that it lived up to my expectations. I met a decadent adult, an old guy who saw someone wide-eyed, naïve, and a bit poetical, and thought, rightly, that he’d found someone prepared to listen to his stories. 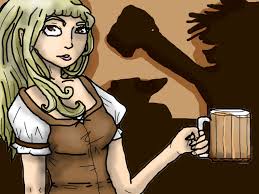 But first he complimented – politely – the shirt of the girl behind the bar and made her laugh, by way of establishing that he wasn’t interested in my 17 year old arse. I only realise that bit now. At the time it hadn’t occurred to me. The barmaid didn’t have any interest in my arse either, and I did mind that. I liked everything about her, so it hardly seemed fair. Still, she poured me a huge handle of beer when I ordered one in my deepest, butchest voice, so she was all right.

His first few stories were good knock-about stuff about working in factories, and workers versus bosses. A couple more beers, though, and the stories got older and more lecherous. He claimed that when he was “a good-looking young feller like you” he’d worked as a model in tableaux vivants.

That was in some dingy club in Greek Street, in Soho. People mainly cite the brighter, more up-market theatres when they talk about tableaux vivants, but this wasn’t one of those. He told me the name of the club as if I should know it, but I didn’t, and I’ve long ago forgotten what it was.

He said it was great being straight in that world, because the men in that world tended to be rich but old and fat and very unattractive. “You get the face you deserve, son, and their lives gave them faces like baboon’s arses. Yeah, I’d say they deserved it.” He said that the better looking guys at the club tended not to be interested in the girls at the club. He called those guys “queers”.

I tend not to self-apply the word, though. That’s partly because I don’t think I’ve ever faced discrimination that involved personal, physical risk, as many gay men have. I’ve been snubbed by people who found out that I’m a dom, because of my sexuality, but no-one’s ever threatened to beat me up for it. So it seems cheap to take on a word, with a hint of martyrdom to it, that I haven’t earned. The other reason I don’t self-apply the word is that “queer theory” writing tends to be tedious, self-regarding wank, and no matter how bad my writing may be, I can’t identify at all with the for/war/d slashes and (b)rackets of queer texts.

Anyway, when that old man said “queer” he meant “homosexual”. He wasn’t a bad man, so he didn’t mean it as a hate word. He used it with a kind of amusement: live and let live, to each their own, we’re all broadminded, and so on, but with a hint of dismissal (“just don’t frighten the horses”) behind it. That won’t do now, but his youth was back in the Golden Age for queer-bashing, so he was probably fairly advanced for his day.

Anyway, he said the other young men in the club weren’t all that interested in naked girls. He’d originally been hired to knock out a wall, and the manager had noticed he’d be strong enough to lift a girl so she could pretend to be flying, and hold still. So that was how he got into theatre.

So as a young, good-looking straight man he was popular with the girls at the club, and he got a rapid education. But as a straight young man, when he was naked on stage with a group of attractive, naked girls he found he had a presentation problem.