There was a time – more than two hundred years – when the English theatre was censored by an official called the Lord Chamberlain. The rulings the Lords Chamberlain made on what could and could not be shown in a theatre were weird and occasionally wonderful. We’ll come back to them in the next post.

The position of Lord Chamberlain, and his strange rules for theatres, were abolished in 1966. One of the principal campaigners for abolition was Kenneth Tynan. When someone mentions Tynan these days, he usually gets this one-line explanation of who he was: “the first man to say ‘fuck’ on television.” 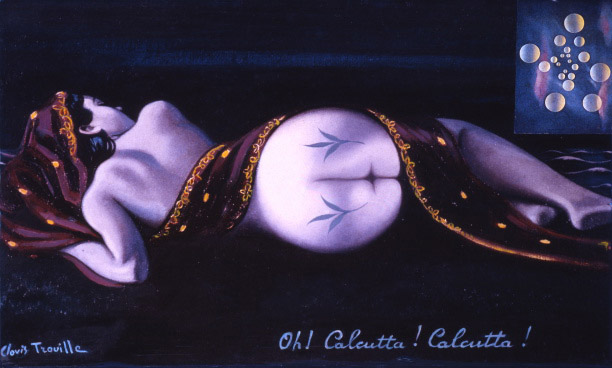 “Oh! Calcutta! Calcutta!” by Clovis Trouille.
The title is a pun on “Oh! Quel cul t’as!” (in English, “Oh! What a lovely ass you have!”.) And maybe, just maybe, there’s a joke about the Black Hole of Calcutta there, too. Ken Tynan borrowed both the image and its title for his show.

One of these sketches is a schoolgirl spanking scenario, the only twist being that the audience is asked, half-way through, to vote on which girl gets the slipper at the end. (There were four “schoolgirls”, so four different endings were written.)

The other sketch is more interesting. It starts with two women on stage, one in bondage, and one kneeling submissively.

A man walks on-stage holding a cane and contemplates the two women. He points out to the audience that the two women both represent images of submission, but there’s a difference. Once the bound woman has agreed to be bound, she doesn’t have to choose to stay. The other woman has to choose to remain, moment by moment, whatever happens. So he rules that the bound woman is less interesting, and orders that she be picked up in a net and carted off-stage. 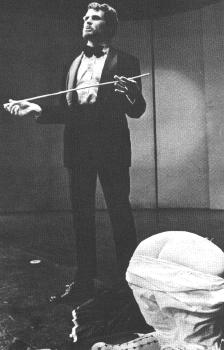 Then he tells the audience that the other woman is an actor pretending to be a Victorian maid, who is about to be caned by her master for, oh, stealing some plums. The woman prepares herself for punishment, turning her back to the audience and pulling down her skirts to receive the cane on her bare bottom.

The man then reminds the audience that this woman, submissively waiting for the cane, isn’t really a Victorian maid but an actor. He even tells the audience the actor’s “real” name. And he says the woman doesn’t really have to stay to be caned. He invites her to leave the stage if she wants.

He walks over and lines the cane up against her bottom.

They probably black out the stage at that point. I’ve never actually seen this sketch, and I read the script more than ten years ago. This is from memory.

This will bring us back to my night “punishing” Sa’afia, really it will.