Now she was standing before me, wearing only her silver-and-black panties, I realized even more powerfully what her clothes had hidden: Claire really was a very  beautiful, very desirable voluptuous woman.

For reasons that were half guilt and, I realized, half desire, she thought that she needed to be caned. I was starting to think I needed, or at least wanted, her.  I  also wanted to give her a compliment, but it would break the mood. 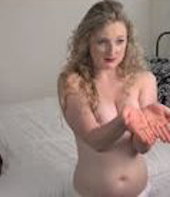 The silence between us reminded her. I’d said six strokes, and she’d had three. She looked into my eyes, and put her hands out again.

I raised the strap and swung it down on her left hand. After the clap of leather on flesh she raised her head and called like a wolf: “Hooooo!” I watched her breasts shake. “Thank you, sir.” She held out her right hand.

I strapped her again, and she jumped, and swore and took her hand away. I raised my eyebrows, and Claire offered up her palm again. “Sorry, sir. I’m just not very brave. Not really.” 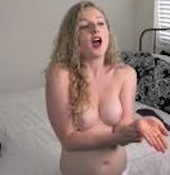 I had wanted to praise her for her bravery. But I said, ”No, you’re not. You’re getting that stroke again, plus a penalty stroke. Keep your hand out, Claire, without any more fuss, or you’ll get the same on the backs of your legs.”

Oddly, that was the right thing to say. Claire relaxed a little, and said, “Thank you, sir.”

I gave her the fourth stroke again, and this time she took it in silence, except for a small, nasal sound of pain before she thanked me. Then I swung the strap down on her right hand, making the fifth stroke harder than any of the strokes she’d had till then. Claire suppressed a cry, through gritted teeth, closed her eyes and pulled her pain faces again, but she held her palm steady, and after a while she was able to breathe, “Thank you, sir.”

“You’ve got two strokes to go, Claire. The sixth stroke and one penalty stroke. Then we’ll be done. You can rub your hands for a moment, if you like.” 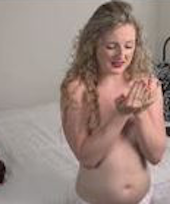 “Thank you, sir. Ahhh.” She rubbed her palms together, turning them as if she were trying to wash the pain off.

Maddie knocked once while Claire was still rubbing, and immediately entered. Claire grabbed for her breasts, covering them with her hands. I said, “Claire. Get your hands away. Put those hands at your sides: now!”

Claire swallowed and stood there, almost naked, waiting for my next instruction. She was blushing a little. I had to work hard not to smile. “Maddie?”

“I’ve called the two shops. Yes, they’ve had stock shrinkage. If we can stop that, and return the clothes in good condition, they’ll be happy not to prosecute.” 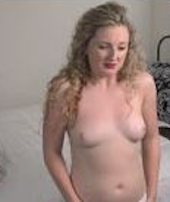 Claire made a sound through her nose. She’d have thanked Maddie imperiously, a while ago, but now her punishment had started, she was in a very humbled state of mind.

I said, “Thank you very much, Maddie. You’re a good … secretary. Now, Claire, we’re not quite finished dealing with you, are we? Hold your right hand out.”

Claire obeyed. The world was doing too many strange things. But obedience was safe. Maddie stared at her, openly. She said, “You really do have beautiful breasts, Mrs. O’Donnell.” I raised the strap. Maddie did not leave.

4 thoughts on “Wicked Wednesday: The shoplifter’s mother and the strap 3”