The following afternoon Mrs O’Donnell, mother of my student Tara O’Donnell, was expected at one-thirty. She believed her daughter had been shoplifting, and she hade agreed to bring me the bag of clothes she’d found under her daughter’s bed.

Mrs O’Donnell turned out to be an older version of her daughter, with the same slightly wide mouth, and California straight blonde hair parted in the middle. She couldn’t have been older than sixteen when she’d had Tara, because she couldn’t be older than her thirty-four now.

Actually, she looked much younger than that. She’d dressed for this meeting in a pale blouse and maroon skirt that must once have been expensive, but both garments were several years old. On the phone she’d mentioned that she did shift work. I guessed that she spent most of her income on her daughter’s education. 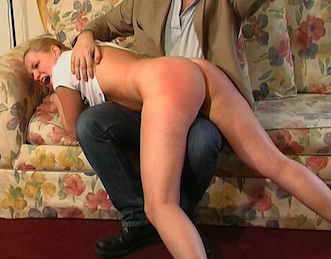 She’d arrived, flustered and apologetic, about fifteen minutes late. It occurred to be that she was the only woman I was likely to see that week who wouldn’t get a spanking for being that late. So I’d smiled pleasantly, partly because of that ridiculous thought, and welcomed her in, accepting from her the bag of clothes that would be the evidence against her daughter.

“Thank you. And it’s Claire.” She sat and crossed her legs. She had nice legs.

“Claire. Excuse me a moment.” I looked at the collection of clothes. They all still had their labels, and the little sticky-paper price tag. It suggested shop-lifting, but it wasn’t conclusive evidence. Tara could have bought them an simply decided they weren’t right, and be intending to take them back. I’d have to get her to admit to the shop-lifting before I could take action. I buzzed Maddie, and she arrived in a few seconds.

The two women looked at each other. I said, “Claire O’Donnell, Maddie Wizniewski. Maddie, can you take these clothes and lay them and flat, one by one, and take a photograph. Also taking a photo of the label and price on each garment. And then bring them back.”

“Yes, Mr Beecham.” Maddie didn’t really have trouble stopping herself from calling me Master in front of people. It was a problem she had only when she wanted to. She picked up the clothes and left.

I said, “Claire. This is a troubling situation, as you know. But there are two things you should know right now. First, the school will handle this from now on. Both the investigation, and the disciplinary side if it turns out that these were stolen. I’m afraid I agree with you that they were. Tara probably doesn’t have the money for those clothes. And if a boyfriend had bought them for her she’d have taken the tags off and worn them for him. So I’ll expect that we will find they were stolen, and not more than a few days ago.” 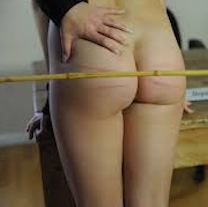 Claire looked at me, biting her lip, her eyes nervous. She remembered what it was like to be in trouble in a headmaster’s office. In fact she was still afraid of this headmaster. Of me. I wondered why.

I continued, “Second, that the police and courts will not be involved. Tara will get a very painful lesson, but she won’t get a criminal record. And not a fine, that would only have to be paid by you.”

Claire nodded. “What would you do?”