Claire had gone inside, in her house, to return the bag of shoplifted clothes to under her daughter’s bed. If she returned to the car, then she would get extra strokes of the cane, and be fucked. I didn’t know which she would choose, but I waited without fretting.

And in about eight minutes she was back, running in her little robe lest the neighbours might see her. She’d hurried. I held open the passenger door, and kissed her once she scrambled inside.

While we drove to my house I said, “Have you ever had a butt-plug in you before, Claire?”

Her face was already red. She knew she’d chosen whatever happened from this point, and believed that only a shameless woman would do that. “No, Master. It feels strange.”

I smiled. “It makes you very aware of yourself. As a possession, not an independent person, all alone.”

Claire considered that. “I don’t think I can say how I feel, Master.  But…. I’m very happy so far. Even though my ass hurts terribly.”

“There’ll be a time, some time tonight, when I ask you to say whether you belong to me. I know what you’ll say. Don’t you?”

“Yes Master. You’ll own me. Like you own a table. Or this car. I look forward to you asking me, sir.” 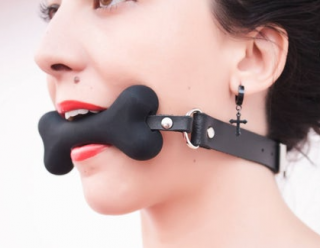 “Right.” There was a bone-gag in the glove box. I passed it to her. “I’ll tell you when I need to hear from you again.”

She accepted the gag. “Yes, Master.” She sounded puzzled. But she put the plastic bone between her teeth, and tightened the clasp behind her head.

Then we drove on to my place in silence, my passenger butt-plugged, nearly naked, and unable to speak. I squeezed her thigh reassuringly.

At last I pulled in at my house, the garage door opening for us so I could park under the house. Claire was relieved, I think, to have privacy when she got out of my car. When she scrambled out and waited I took the cane from the back seat, where I’d thrown it.

“Turn around and face the door, Claire.”

She tried to say, “Yes, Masster,” through the gag. It came out as, “Eff affer.” When she had her back to me I unbuckled her gag and removed it, slipping it into my pocket. She worked her mouth. “Thank you, sir.” 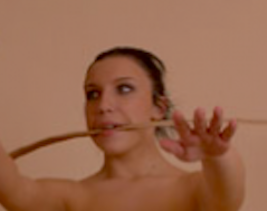 I put the cane to her mouth. “Open, and hold the cane for me, Claire.” She obeyed, silently since the cane had replaced the gag, and she guessed that there’d be consequences if she allowed it to fall from her mouth.

Then I pulled the robe back from her shoulders, down until her breasts bounced free, and then let it drop to her feet.

“Pick that up. From now on, whenever you come to this house, this is where you remove your clothing. You’re not allowed to wear clothes in my house. Is that understood, girl?”

Girl. I don’t think it occurred to Claire, at that moment, that she was a couple of years older than me. She bobbed to collect the discarded robe.

5 thoughts on “Wicked Wednesday: Owned like a table. Or car.”