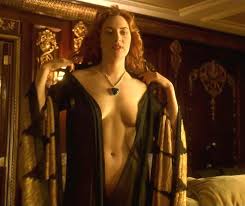 Kate Winslet’s robe goes down, on the Titanic

“But,” Maddie said, “I collected every bit of courage that I had. And I said it. I said, ‘Sir, please cane me, and then afterwards, please fuck me.’

“And he smiled at me, so that I felt like the most blessed girl in the world, and said, ‘Thank you, Maddie. You asked very prettily. And yes, yes, girl, I will.'”

I said, “That sounds good.” Maddie and I were lying together on the mattress in the store room. Oddly, I’d just caned her and fucked her myself, not so long before.

We were both lying on our backs. I leaned back on a collection of pillows, and Maddie lay back on me, her head nestled in the crook of my arm.

Maddie turned her head and kissed my chest, not so far below my nipple. “It did. It sounded so wonderful. I was in heaven. But don’t forget, sir. This is a cautionary tale. It’s why you should take Jennifer soon. She wants you to. And if you hold her off for too long, there’s a real risk it’ll all go sideways. Or down, like the Titanic. Jennifer should have her fairy-tale. I’m afraid I didn’t.” 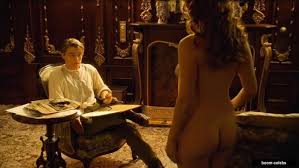 Leo takes down Kate’s particulars, on the Titanic

I said, “Oh?” I’d forgotten that Maddie was telling me this story so that Jennifer wouldn’t have the same fate Maddie had had, at Jennifer’s age. Therefore this story didn’t have a happy ending.

“Yes. Oh. As in Uh-oh. So I danced out of his office, so happy. And although I knew I was going to get the cane straight after school, I was looking forward to it.

“I figured it would hurt like his spanking hurt, in a lovely exciting way. And then his cock – I’d liked it so much when it’d been in my mouth. I knew I was going to love it when he took me. Not just my cunt, but my whole body. I was going to be his.

“I squirmed all afternoon. God, I remember it. I was so wet and so wanting. I was hotter and hornier than I’d ever felt. If I’d even got a breath of wind on my cunt I’d have exploded. I would’ve screamed the whole classroom down. Shattered the windows.” 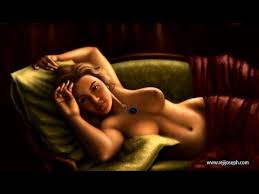 Kate enjoys a good lie-down, on the Titanic

I reached down idly and tickled Maddie’s belly, then a little further down and stroked her cunt. She was eleven years older now than she’d been during the events she was describing to me, and soon to turn thirty.

She was every bit as wet as her younger self. Maddie sighed comfortably as my fingers sank into her. I pushed my fingers a little deeper, and she rolled her hips, nuzzling her cunt greedily against my hand.

I had an idea that Maddie was going to need comfort after she’d finished her story. I kissed her. She kissed me back, but she broke the kiss first and turned her head away. “So, after school I went back to his office.”

I tell stories at a leisurely pace. If a thing’s worth doing it’s worth doing slowly, say I. So it’s easy to forget how Maddie’s story started.

In a deleted scene, after the Titanic has sunk, Kate learns to walk on water and saves herself, Leo, and the wooden panel. Certainly, it was a night to remember

Maddie’s lover, our narrator, has admitted that he has the desire and the duty to initiate his student Jennifer Perch into certain adult pleasures. Maddie tells him her story to advise him that he should make sure he looks after Jennifer properly and make sure her first sex is happier than Maddie’s had been.

So I’m foreshadowing that the next episode (or more, given the speed at which I tell stories) will be realistic rather than pornotopian.

But don’t worry too much. I can say, without giving too much in the way of Spoilers, that there are happy endings all round, in the past and in the present.