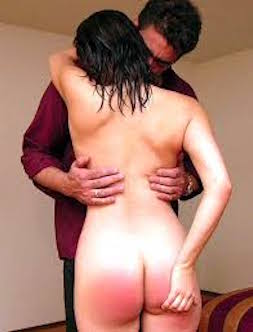 I rushed to him, and I couldn’t stop. He caught me and folded his arms round me. I lifted my head up and he kissed me. I kissed him. He had a strong face, with the stubble coming through. His breath smelled of mint. It felt so good. How long we stayed like that I don’t know, but then he stepped back just a little.

He started to undo the buttons on my shirt. I just look at him, longing, while he undressed me, took off my tie, and then the shirt. I was naked, except for my shoes and socks, and my bra.

I did, and I felt him undo the bra and take it off.

Then he took my hands in his and pulled them together, behind my back. “Don’t move,” he said, and he tied my hands together, behind my back, with my own school tie. I gasped, wide-eyed with the wonder of that. I’d been helpless before anyway, but to be tied was a whole new level. He didn’t need me to choose to obey him, now. I was at his mercy. My cunt felt … empty, wanting. I needed his fingers back, or better yet his thing.

Then he smacked my bottom. I gasped. I was so tender there, and the smack re-awakened all that soreness. He spanked me another five times, without speaking. I trembled, trying to hold myself still for him.

“Now get down on your knees, Maddie. You know why, don’t you?” 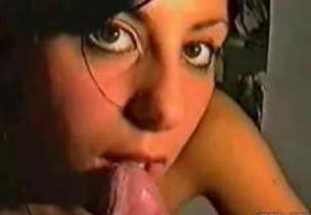 “Oh yes, sir!” So, he was going to let me suck his cock. I’d heard girls talk about feeling a boy get more and more excited and then spurting their salty stuff into their mouths. Then they’d swallow it. I wondered what he’d taste of.

I crouched as low as I could, then fell forward onto my knees. It was awkward with my hands tied. My face was level with his …

I watched him unzip. I’d hoped he was going to take his pants off, but it seemed that I was only going to be allowed to touch his cock. I leaned forward, to kiss it through the material of his pants.

He let me for a few seconds. Then he pulled my head back, with his hand in my hair. He made an adjustment to his pants with his other hand and suddenly there was his cock. It was the first I’d seen. Except for my brothers after a shower, when we were very young.

But his cock was very different. It seemed huge, and it pointed straight at me. It wanted me. It needed me. I leaned forward to take it, and my hair pulled, because he’d neither let go nor moved his hand. I had to push forward, hurting my own scalp, so I could kiss the end.