I’m keeping to four posts a week, at the moment. I looked back a couple of years, back in this blog, and found I was doing seven posts a week.

They tended to be shorter, because I’d write something, get carried away as I always do, and it would turn out longer than I’d expected. So I’d chop it into two or three parts, and run them on three successive days. 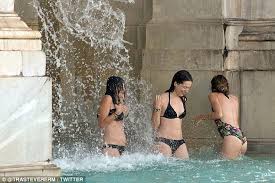 But now I’m writing a novel, and I’m keeping at it because I want to finish it soon. There are five parts, and the final part is expected to be relatively short. I’m on Part 5 now, and I can smell the finish line. I feel triumphant!

I’d like to do more discussion pieces, think pieces, for this blog.

But at the moment I can’t think of anything but Rome and a rich Scots girl, who paints but seems only able to sell her art to men who fancy her, and how she breaks through to a wider audience. I can’t afford to do any thinking except about how to make that sexier and funnier. 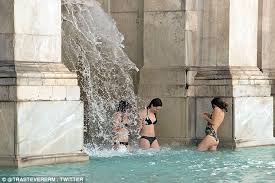 I just wrote a scene (for Part 4) in which the hero fetches his beautiful but mildly drunk girlfriend out of Trevi Fountain. It adds absolutely nothing to the plot, I think, but it belongs in the book just the same.

In honour of that scene, here are some photos of girls in Roman fountains.

The top two are from a news story that said Romans were “outraged” to  find pretty underdressed girls in a fountain. Bullshit, I have to say. Possibly a couple of lemon-sucking Romans somewhere went all crinkly-mouthed about it, but Romans in general are overwhelmingly pro-pretty girl.They even seem to like underdressed, wet girls. Go figure.

Don’t let the Murdoch press (or Dacre press in this instance) tell you otherwise. In fact, don’t let them tell you anything. 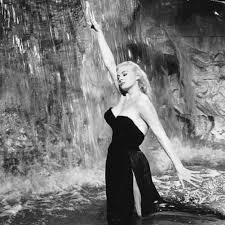 Here’s one I prepared earlier.