So I’ve got my tits out in front of this guy. First man to see them. [Maddie lay beside me. She was telling me a story that contained a bad memory. But at this moment it was turning me on. So I kissed her, holding and stroking her face. That reflected both of the feelings her story was bringing out in me.]

And I knew I’ve got good tits, though god knows I didn’t like much about my body. [Thank you. I like it much better now.]

I was hoping he was impressed, though he was keeping his face blank. as though this was something impersonal. He’d just made me strip for him, and he was about to hurt me. You can’t get more personal than that. But there were no choices. 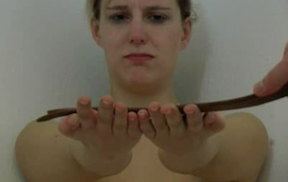 Well, I had no choices that wouldn’t make things worse. Or better, in some way I wasn’t quite sure about. But I couldn’t have handled “better”. Not just then. So I put my hand out for him. My heart banging, and my cunt still wanting so hard it hurt. I watched him raise the strap, over his shoulder. “Keep your eyes on mine, Maddie, until we’re finished here.”

I said, “yes, sir.” He had such kind eyes, too. And he arced the strap over and down, so it seemed to move almost slowly until the impact on my palm. I cried out. It felt so fierce, and also, down deep, it felt so good. Like sugar and fire. And I said, “One, thank you, sir.”

It felt so easy to humble myself like that. He hadn’t asked me to count or thank him. But it felt right. And made it sexier. He looked incredibly surprised, almost shocked. He’d expected me to take my hand away and burst into tears. Like most girls do.

Maddie had settled on her back beside me. She reached over and gave my cock a squeeze. “No, she’ll thank you. And she’ll mean it.”]

But though he looked at me with real interest after that he didn’t say anything. He just raised the strap over his shoulder and swung it. That impact, the leather against my palm, made my hand, then my whole body feel like it was glowing. Hot, yes, but also flying. In a new world. I said, “Two, thank you, sir.” 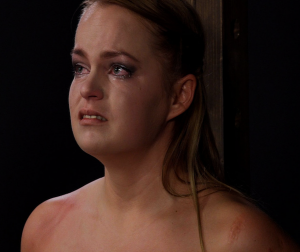 He grunted then, as if we’d been doing thing physical between us. But he swung the strap again, a little harder, I think, but it didn’t matter. I thanked him again, and, oh god, how I meant it. I must have sounded so earnest. So heartfelt. I cried then. Not because of pain.

He knew what was happening, I’m sure of it now. I didn’t look at his cock, but I’ll bet it was hard. When he told me to hold out my other hand, he had the same constriction in his voice that boys had, when they tried to get up the nerve to ask me out. But he made it sound different: it sounded like intensity.

So we we stared at each eyes while he gave me the next three strokes. And we stood there, staring at each other, after I’d said, “Six, thank you, sir!”

His mouth opened. I thought he was going to tell me to put my clothes back on again. But he didn’t. He stepped forward, with his hands out to me, in invitation. So I rushed him, hung my arms around his neck, and pressed my breasts against him. And rubbed, as though I was trying to bore a hole through him. Two holes. Eventually he touched me. I felt his hands on my bare back. The small of my back, then sinking to hold my hips.

I wanted his hands under my skirt. I was still on fire, though my hands didn’t hurt at all, though he’d strapped them pretty hard. I wanted more. I looked at him. “Sir? Please?”