Once upon a time there was a girl called Ojastara…

“I’m giving you a dozen with the riding crop before you go to work. Would you like me to double that?”

She had one hand on her cunt, the other squeezing her left nipple, so she couldn’t look sorry, but she said,”Sorry Master.”

“Shut up and don’t interrupt again.” She had the sense not to say anything in answer. She closed her eyes and listened.]

And Ojastara so loved the world that she tried to fuck everything in it. One day she was walking down a beautiful wooded lane, followed by a string of dogs, male and female, all attracted by the wonderful heat smells she was giving off, when she saw through the trees beside the path the most beautiful swamp there had ever been.

The bottom was soft mud with a layer, perhaps 30 centimetres deep of clear, warmish water above. The leaves floating in it were brown, like her own eyes; it seemed that she and the swamp stared at each other. She took off her red and blue polka-dot dress and laid it on the ground. She was naked, beautifully curved, and somehow blacker than coal, shining radiantly. Some of the more intelligent dogs simply sat and gazed at her, while she showed herself in all her sexual perfection and glory.

She waded in. Behind her the dogs began fighting over her dress, and it was clear that she would spend the rest of this walk naked. But she wasn’t thinking about that. 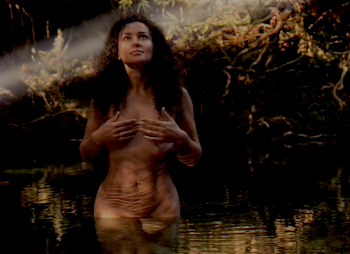 Her feet descended through the mud, and only stopped when they found a firmer surface perhaps a metre below. The water reached just under her breasts, and the mud reached her cunt. Ojastara wasn’t alarmed, because she could feel sentience from the swamp. Benevolence.

Then the mud at her cunt began to move, to stroke her, even penetrate her.The mud pressed her backwards a little, and then supported her, lying back, her breasts now caressed by the water, her hair floating around her.

Ojastara thought, “This is a lover, I guess. It’s the biggest, weirdest lover I’ve ever fucked.”

She heard the swamp, in her head, “No. I am fucking you.” It was more male than female, though both were there, and it sounded amused.

Ojastara didn’t reply, because the swamp pressed her legs apart, and took her, the mud quite manlike and determined, in her cunt and then – she felt it parting her buttocks first – in her asshole. The two protuberances inside her were firm, cocklike, and they pistoned her, the one in her ass alternating thrusts with the one in her cunt. She relaxed, perhaps a little too much, and her lover raised her a little so her head was mostly out of the water.

Then the mud held her breasts, squeezing hard, pinching her nipples with pain that sang in her cunt like a blessing, and the two cock-like projections began to ram her in unison, fucking her hard, now, and fast.

The voice in her head growled hungrily, but she was quite unafraid. Her cunt and ass were both aflame, it felt, but a sweet, gentle kind of flame, and she felt something build up inside her, demanding release. She came, hard, and screamed, so loud the dogs all ran away, each with a fragment of her dress in its teeth.

The swamp was infinitely pleased with her. “That’s a lovely sound, my little one. I think I’ll hear it again.” And it resumed fucking her, hard and quickly now with no build-up. Within a couple of minutes, feeling no longer completely in her body, she heard herself scream again. And wonderfully filled and held, she came again, screaming and wailing.

And you, Ojastara in my bed, have been told a moral tale, that all good things will come, and sometimes that includes you, if you’re a good girl.

(Those were that words that told Ojastara that she had fifteen seconds to come. She – the Ojastara in bed with me – shut her eyes tight, blowing air hard from her mouth, and, palm clamped against her cunt, fingers still working busily, her other hand torturing her breasts, she opened her eyes and her mouth, and screamed.

She kept her eyes on mine right through her orgasm, and I realised that was something some previous Master had trained her to do. I decided that I liked it. In fact there was nothing about Ojastara, slavegirl, that I didn’t like. I kissed her. “Good girl. You did well.”

“Master? Am I still in that swamp?”

“Of course you are, darling. The next story will start from there.”

“Will I be whipped, in some of your stories?”

“You’ll be whipped before you go to work this morning. But you don’t get to say what happens in these stories, love. Who’s that up too?”

She nodded, resigned. “You, Master.”

“Now go back to sleep, little one. And don’t you dare wake me again till seven.”

“Yes, Master. Thank you!” And she rolled over, pressing her ass against my cock, in case I woke up and needed to awaken her.)

1 thought on “The Ojastara Tales: Tale the First”