There are many poems based on the Children of Lir legend, which I discuss here.

There’s one by Yeats’s friend “AE”, but it followed a later version of the story, and I’m not going to use it.

This is from Twenty-One Poems by Katharione Tynan, selected by WB Yeats. So it’s not Yeats, but there is a Yeats connection. It’s an image of their last days as swans, shortly before they transform back to human form and die.

THE CHILDREN OF LIR

Out upon the sand-dunes thrive the coarse long grasses;
Herons standing knee-deep in the brackish pool;
Overhead the sunset fire and flame amasses
And the moon to eastward rises pale and cool.
Rose and green around her, silver-gray and pearly,

Chequered with the black rooks flying home to bed;
For, to wake at daybreak, birds must couch them early:
And the day’s a long one since the dawn was red. 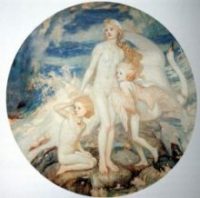 The children transforming into swans

On the chilly lakelet, in that pleasant gloaming,
See the sad swans sailing: they shall have no rest:
Never a voice to greet them save the bittern’s booming
Where the ghostly sallows sway against the West.
‘Sister,’ saith the gray swan, ‘Sister, I am weary,’
Turning to the white swan wet, despairing eyes;
‘O’ she saith, ‘my young one! O’ she saith, ‘my dearie !’
Casts her wings about him with a storm of cries.

Woe for Lir’s sweet children whom their vile stepmother
Glamoured with her witch-spells for a thousand years;
Died their father raving, on his throne another,
Blind before the end came from the burning tears.
Long the swans have wandered over lake and river;
Gone is all the glory of the race of Lir:
Gone and long forgotten like a dream of fever:
But the swans remember the sweet days that were.

Hugh, the black and white swan with the beauteous feathers,
Fiachra, the black swan with the emerald breast,
Conn, the youngest, dearest, sheltered in all weathers,
Him his snow-white sister loves the tenderest.
These her mother gave her as she lay a-dying;

To her faithful keeping; faithful hath she been,
With her wings spread o’er them when the tempest’s crying,
And her songs so hopeful when the sky’s serene. 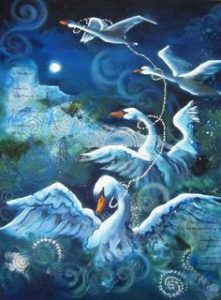 The silver chain that binds them

Other swans have nests made ‘mid the reeds and rushes,
Lined with downy feathers where the cygnets sleep
Dreaming, if a bird dreams, till the daylight blushes,
Then they sail out swiftly on the current deep.
With the proud swan-father, tall, and strong, and stately,
And the mild swan-mother, grave with household cares,
All well-born and comely, all rejoicing greatly:
Full of honest pleasure is a life like theirs.

But alas ! for my swans with the human nature,
Sick with human longings, starved for human ties,
With their hearts all human cramped to a bird’s stature.
And the human weeping in the bird’s soft eyes.
Never shall my swans build nests in some green river,
Never fly to Southward in the autumn gray,
Rear no tender children, love no mates for ever;
Robbed alike of bird’s joys and of man’s are they. 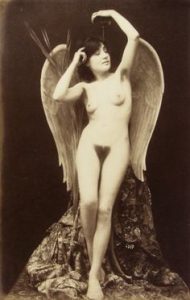 Babbles Conn the youngest, ‘Sister, I remember
At my father’s palace how I went in silk,
Ate the juicy deer-flesh roasted from the ember,
Drank from golden goblets my child’s draught of milk.

Once I rode a-hunting, laughed to see the hurry,
Shouted at the ball-play, on the lake did row;
You had for your beauty gauds that shone so rarely.’
‘Peace’ saith Fionnuala, ‘that was long ago.’

‘Sister,’ saith Fiachra, ‘well do I remember
How the flaming torches lit the banquet-hall,
And the fire leapt skyward in the mid-December,
And among the rushes slept our staghounds tall.
By our father’s right hand you sat shyly gazing,
Smiling half and sighing, with your eyes a-glow,
As the bards sang loudly all your beauty praising. ‘
‘Peace,’ saith Fionnuala, ‘that was long ago.’

‘Sister,’ then saith Hugh ‘most do I remember
One I called my brother, one, earth’s goodliest man,
Strong as forest oaks are where the wild vines clamber,
First at feast or hunting, in the battle’s van.
Angus, you were handsome, wise, and true, and tender,
Loved by every comrade, feared by every foe:
Low, low, lies your beauty, all forgot your splendour.’
‘Peace,’ saith Fionnuala, ‘that was long ago.’ 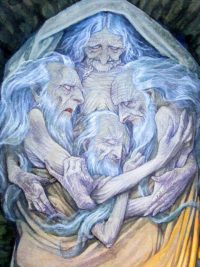 The children suddenly ageing, back in human form

Dews are in the clear air and the roselight paling;
Over sands and sedges shines the evening   star;

And the moon’s disc lonely high in heaven is sailing;
Silvered all the spear-heads of the rushes are.
Housed warm are all things as the night grows colder,
Water-fowl and sky-fowl dreamless in the nest;
But the swans go drifting, drooping wing and shoulder
Cleaving the still water where the fishes rest.

3 thoughts on “The Children of Lir: An elegaic poem”