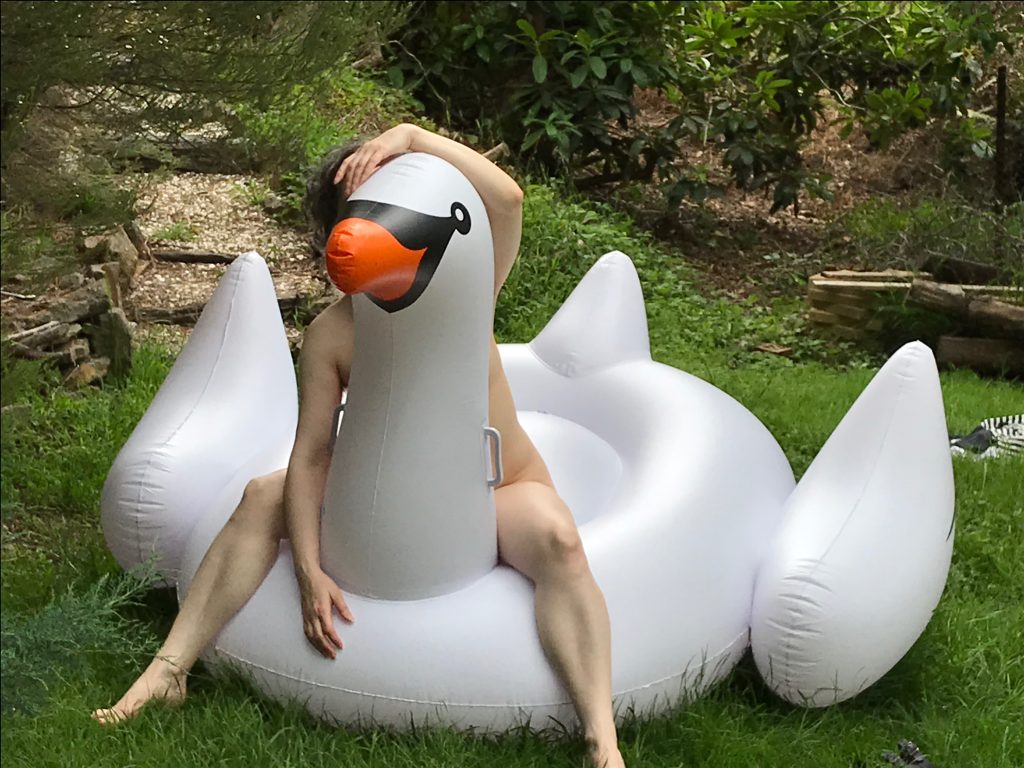 Flying united! No silver bondage here! (Ok, I explain the bondage reference below.)

If we move from the classical story of Leda and the Swan, and look at Celtic sources, one of the earliest surviving tales of human-swan beings is of the Children of Lir.

The Children of Lir

King Lir is the same guy as Shakespeare’s King Lear, though Shakespeare’s version leaves out the swans and the magical transformations. In fact Lir’s correct name is Lear, but in English he’s usually called Lir to distinguish him from from the Shakespeare version.

Anyway, Lir marries Aoibh, which is the Celtic spelling for Eve. Celtic spelling was invented by foreign monks, and is utterly stupid. I say this as a Celt. From here I’m going to call her Eve.

Lir and Eve have four children: Fionnuala (Fenella), and the boys Aodh (pronounced Eh, and probably a version of the name Hugh), Fiacra and Conn. But Eve, beautiful and universally loved, dies.

So Lir marries Aoife (more like Eva), and she’s jealous of the memory of Eve, still so widely loved. So she turned Lir and Eve’s children into swans.

They spend 900 years in swan form, able to speak and sing beautifully, but stuck in swan form. Finally, they are freed to return to human form by the prophesied marriage of two people who we won’t worry about here. However, because they’re 900 years old, they die.

There are various Christian versions of the story, with them being freed by a monk, or by the tolling of a church bell, but those bits were added later to save the story from being excised entirely, by the new Christian overloads.

One significant thing about this story is that the four of them were bound together by silver chains, for that 900 years. It was the breaking of the chains at that wedding that allowed them to transform back.

But 900 years is a long time to spend in bondage, and all the safety manuals advise against it.

For a really good poem about The Children of Lir, conveying something of the sadness and isolation of those four swan-children, children even at 900-0dd years old, and about to die, clickmy earlier post, here.

I chose a poem a poem by a friend of WB Yeats, Katharine Tynan. It was one of his favourite of her poems. You can find it that post, which I’ve linked to here.

12 thoughts on “Sinful Sunday: The Children of Lir”