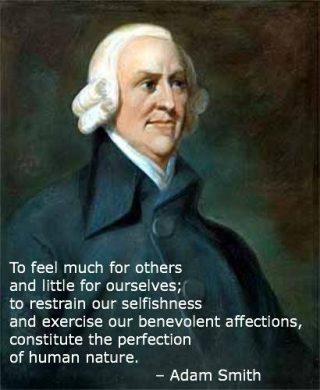 Still a right-wing shitbag, though.

I was at a munch a while back. I got into an argument with a guy who was a strong Liberal Party supporter (the right-wing party here, currently in government) about economics. He supported tax cuts to the rich, eliminating government involvement in the economy,  and so forth. He said these were classic Adam Smith ideas.

I’ve read essays about Adam Smith, which said he wasn’t simply a neo-liberal monetarist, but envisaged something a lot closer to the welfare state that his followers are busy dismantling.

So I argued that those aren’t actually a set of policies that Adam Smith would support. Our argument got a bit obscure. I’d say I lost, actually. I haven’t read Adam Smith directly, and he’d read The Wealth of Nations, so I couldn’t cite chapter and verse. I’d have been better off arguing that that tax cuts to the rich, and so forth, are terrible for the economy, because they make most people too poor to buy the extra things that keep the economy going above subsistence level. But though that’s true, the munch was a social occasion, and people tend to get angry when you get on to topics like that. So I picked the more academic issue.

Anyway, most of the other people at the munch disliked the government, but mainly because it’s been pandering to the Christian right on gays and lesbians, funding to Christian schools and paying for Christian activists in non-Christian schools. That sort of thing. So our economics argument was boring, and they politely ignored it.

From my point of view politics is mostly about economics: you need to tax those who can afford it so you can provide government services that make life better for everyone, especially health, education, welfare, public housing, and necessary infrastructure. Businesses do better where there’s a decent level of social infrastructure in place.

Other issues, even including things that I have passionate feelings about (for marriage equality, and against censorship, for example), are important, but less important than whether people can get jobs that pay them enough to live on, and get wage increases.

So that’s my politics. I’m largely socialist on economic issue, and pretty much anarchist on social and sexual issues. Anything sane adult humans want to do with other sane, consenting adult humans is ok with me. People having the right to say or write or hear or read what they want: that’s ok with me too.

(Racist, sexist, nasty, and generally horrible speech should be countered and mocked, not suppressed. Happy to argue that, in some other post, if people want.)

Generally I hate Nazis. But this guy seems to know what he’s doing

That gets old, and it was irritatingly silly and insulting the first time. 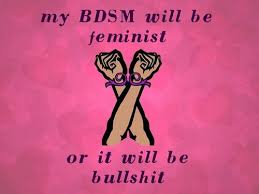 We are more likely to be in the sex-positive feminist or feminist-supporting faction.