Cindy said, “you’re asking me, seriously, to strip naked? So you can spank my bottom?”

Now that she’d said it, it did sound hot. 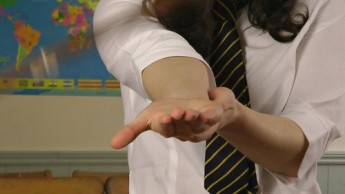 This time the Master didn’t smile. “Hold out your other hand, Cindy.”

Cindy hesitated. She wasn’t going to be spanked. Not without a fight. But she’d already held her hand out for him to smack her.

It’d be silly to make a fuss, when it was only the other hand. And she could feel her pussy again, throbbing, wanting his touch. Even – or especially – if it hurt.

He watched her, without commenting. He knew what she was thinking. She was sure of it. He knew that her pussy was wet, too. Shyly, knowing she was admitting too much about herself, she held out her hand. Palm upwards, so that he could smack her.

The Master stood up. He lifted her hand a little, and nodded. But he didn’t smile. Or praise her. Cindy missed his approval. Its absence punished her much worse than the smacking she was about to get. Then, unexpectedly, he touched her face. Cindy felt unreasonably happy at the gentleness in his touch. He did like her.

But his face was still stern. “Look into my eyes while I smack you, Cindy.”

“Yes, Sir.” She thought he’d like to hear her say that. But her voice sounded odd to her. It was a breathless little squeak.

“And open your mouth.”