On Saturday morning there was a knock at my door, tentative so I knew it was Sa’afia come to be punished. It was quarter to ten, so I came out ready to pretend to be angry at her for being early. I’d intended just to tell her off and keep her standing out there, waiting. But she was wearing clumpy shoes and a simple white cotton dress that clung to her like a nightie. It was wet in spots. She’d run from her car, but it was raining. She carried the stick in both hands, behind her back.

I put my hand on her face, slapping her lightly but then holding her, my thumb under her chin, fingers still touching her face where the slap had landed. “I said ten o’clock!” As if I were angry. It’s a ridiculous reaction to a pretty girl in revealing clothing on my doorstep, but that didn’t matter. Sa’afia wanted to be in the wrong. She’d chosen to be in the wrong, with aforethought. She wanted to be put in that quiet, palely sexy place she’d thought about when we were on the phone yesterday.

I reached behind Sa’afia and took the stick from her, and pulled her a little inside the alcove at my door, so she was out of the way of the street. A neighbour or passer-by who heard a commotion and looked through the hedge to see what was going on would see us. But we had some privacy.

“Put your hands on the door!” Sa’afia obeyed, and arched her back, presenting her ass. I could have punished her for obeying without verbally acknowledging the order, but she wanted to go deeper than she could go and still be verbal. Even “yes sir” would soon be beyond her, and I didn’t want to keep her earthbound. So I smacked her bottom through that dress, and put my hand under her tummy to push her ass out just a little further. Then I kicked her left shoe, and she grunted and parted her legs further, arching her ass up just a bit more.

I swept the dress up, ready to smack her bottom. I was still thinking of making her wait outside, ass burning a little while she thought about what was to come. Once I took her inside. But there was her warm, brownish ass and waist. I stopped. She wasn’t wearing knickers. Sa’afia jolted me, when I saw her naked. I hadn’t asked for that. I approved, but I hadn’t thought of it. I drew in my breath, audibly, and – 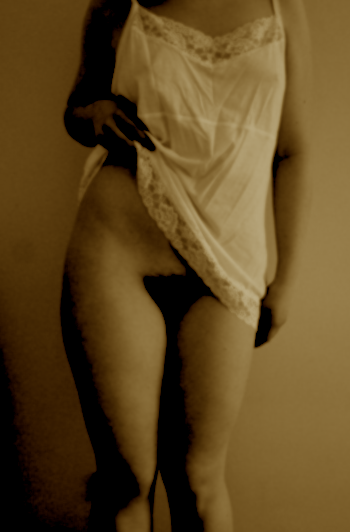 The thing is, I’m a simple system. My reactions can be utterly predictable, and Sa’afia had predicted this one. Sa’afia, near-naked, sexually available and presented on my doorway, made me hard. She’d set a time limit that hadn’t been there before, about how long I could spend before I was inside her.

I could have grabbed her hair then, turned her face and kissed her, without breaking role. Because I suddenly wanted to kiss her. But if I did she’d have known the effect she’d had. Instead I smacked her ass, hard, about a dozen times. Neither of us were counting.

If there had been a passer-by, he or she would have wanted to know what was happening on the other side of the hedge. I saw something in Sa’afia’s eyes, a kind of panic or excitement. She’d had the same thought.

“Don’t worry,” I said. “The neighbours know what a girl sounds like when she’s getting a spanking.” I smacked her again, hand impacting her ass lusty and loud. Actually, the neighbours on one side listened to sports on full volume when they were home, and on the other side was an old couple who seemed to be largely deaf. It actually was true that Sa’afia wasn’t the first girl I’d spanked on my doorstep, but I was sure no-one had ever heard a thing.

Still, Sa’afia’s eyes were wide and wild, so I added, “they’ll hear you screaming for forgiveness later. Won’t they, Sa’afia? So they’ll know what a stupid girl you’ve been.” She closed her eyes and dropped her head. A little humiliation was good for her. She liked it, anyway. So I said, “But if you make too much noise, I’ll send you over to apologise.”

“Now hold still.” I took the stick and pressed it to Sa’afia’s lips. She kissed it sweetly, wetly and full-heartedly, trying to show me she was good. I swished it, audibly, through the air a couple of times, and then tapped the undercurve of her buttocks. So she knew where she was going to be hurt.