“Ah.” Part of me wanted to raise the belt, order Sa’afia to hold position, and carry on with her strapping. Sa’afia had been keen to show her marks to Ana, and Ana knew exactly how her cousin got them. Sa’afia had apparently told her in considerable detail. So she could hardly claim to be bashful now. I wanted to say something along those lines and continue Sa’afia’s leathering. It was my job to be immoveable.

Then I said, “Ah,” again. Maybe I didn’t want Ana to hear Sa’afia getting strapped, or fucked. Life with Ana was difficult enough. Worse, I didn’t know the effect it would have on the balance of power between Sa’afia and Ana. That was the sort of thing I wanted to leave alone.

And if I continued, there was no way round it: I’d enjoy Sa’afia’s embarrassment. That meant I’d be using Ana as a participant, if indirectly, in the sex between Sa’afia and me. That seemed bad, a bad thing to do.

I pushed her head down so she looked down at her body. “You should have thought of that before. Keep still.” But I said it quietly. I gave her three more strokes, but across the backs of her thighs. They were meant to hurt, and I was sure they did, but the belt didn’t make the pistol shot sound it made when it landed on her ass.

The sound couldn’t be audible out of the room, unless Ana had her ear to the door. And Sa’afia should be able to feel that she’d been been mercilessly treated. 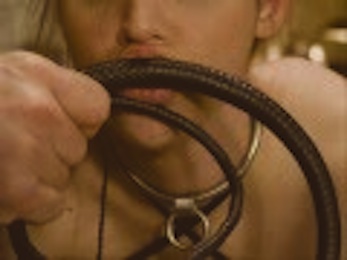 Sa’afia was puffing silently, with the effort of not moaning or crying out. Those stripes on her thighs had hurt her.

I put the belt to Sa’afia’s mouth. She kissed it, and glanced at me. She was happy. I said, “Now.”

Sa’afia dropped to her knees.