I smacked her again. “You should do as you’re told. And shut up.”

Sa’afia looked down and touched the bed, ready to lower herself to the floor, but I grabbed a handful of her hair. “No. Too late for that.” 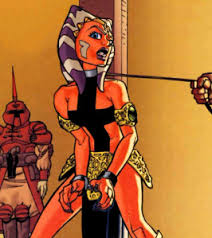 I remembered her reaction, last night, when I’d pushed her mouth onto my cock after I’d placed a fresh set of stripes across her lower buttocks. She’d closed her eyes and focussed on something inside herself while she sucked me. It seemed that pleasuring me while her ass burned was exciting. She could think of herself as a slave princess, or something else she wanted to be.

I pulled Sa’afia’s head up and back, so she looked into my eyes, and held her gaze while I took off my belt. It slithered, rustling, the sound rising abruptly as the belt pulled free. Her mouth fell open. I whispered, “You recognise me taking my belt off. You know it just from the sound.”

Sa’afia said “Nnnnn.” She would have nodded if I’d let her move. She was breathing hard. I took the belt in my right hand, by the buckle. I didn’t double it. I held Sa’afia’s arm while I pushed her forward, so she couldn’t quite fall forward over the bed. She bent forward and held her hands up and out, with her elbows close to her sides.

There was something immensely feminine, though not graceful, about the pose. My heart thumped suddenly, as though it had missed a step. For reasons I’ve explained before, I said, “You’re lovely.”