I didn’t catch Sa’afia’s eye just then. She couldn’t spank Ana, partly because she now thought of spanking as sexual and she wouldn’t do sexual things with girls, or with her cousins. And she was submissive. 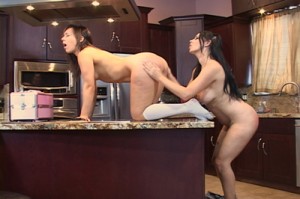 I’d persevered, but it had turned out to be as exhausting as trying to teach a cat to balance on its front paws. I’d realised that my attempts were only spoiling the mood. So I’d done my Homage to Brian Blessed act. Brian Blessed was a big burly, shouty, English actor, a bit like Oliver Reed without the vicious edge. My Brian Blessed act involve  lots of ranting and roaring and slapping. It brought the mood back to where it should be. Since then I haven’t tried making one submissive top another. Not all submissives are quite so averse to trying the other role, or at least play-acting it. But I knew that Sa’afia was. I’d just given Ana a completely empty threat.

But Ana wasn’t so sure she was safe from Sa’afia. “Aw no! That wouldn’t be any fun!”

“Then behave yourself, Ana.” I said it as though I’d won a point. I wasn’t sure that I had.