So Svitlana and I were a couple. Of sorts. For a while.

One of the sorts of couple we were was “secret”. Svitlana generally turned up after midnight, but only if I’d assured her there was no-one with me and no-one expected.

Some of our time together was like the night I’ve just described. Svitlana would turn up, slightly anxious until she was safely in the door, and not really relaxed until she was bed, being admired.

Other times … I’m going to try to tell a story quickly. 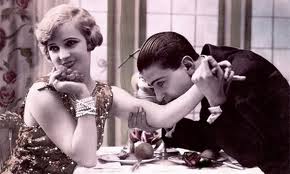 Svitlana and I were out for dinner. We didn’t go out often, but I’d won a contract so I was in a spacious mood. She talked me down to something less grand, a cheap Thai restaurant that fed a lot of students. So I sat her down and ordered wine. We laughed, ate and talked, exactly as if we were a couple on a date.

Svitlana’s chair faced the entrance, which I thought nothing of at the time. But it wasn’t an accident. Suddenly she said, “oh shit.” She got up and disappeared to the toilets. I had another prawn and a glass of wine, because I guessed that dinner was over. And, without looking around too obviously, I saw that Kerry had arrived, with friends.

Kerry was the woman who’d warned Svitlana against various male friends of Barbs, for various political and personal shortcomings. Jaime the dom pervert had, as I’ve mentioned, taken a prominent role in that list of male scum. Kerry had encountered so much bigotry for her own sexual choices that it could never occur to her that she too was a bigot. She was the reason Svitlana was hiding in the toilets.

Kerry’s friends filed over to a reserved table, which fortunately was on the other side of the restaurant. I got a text from Svitlana asking me to wait for ten minutes and meet her in the car park outside. A moment later she made a break for the exit, her hair tucked under a sort of mob cap, her collar up and her head down. So I pretended not to know her, and ate as much of my meal as I could manage in five minutes. Then I paid and sauntered out, taking the wine bottle with me.

Svitlana was by my car, freezing since she hadn’t asked me for my keys. I pushed her down over the hood and spanked her, since our relationship had progressed to the point where I could do that sort of thing without asking. I’d have liked to have fucked her, but she was obviously too nervous about discovery for that to be any fun. So I gave her the wine. And bought her a burger on the way home.

So we were always a secret couple. Spies on the porch of love.