I read in Fortean Times (“so it must be true”) that a few years back a group of those Philippine Christian worshippers who have themselves nailed to crosses at Easter time were pleased, at first, to see that they’d been joined by a young Japanese man. 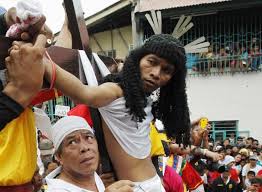 Crucifixion season in the Phillippines. As painful as Civil War re-enactments?

He, like them, was dressed in a loincloth, and he had real nine-inch  nails driven through his hands and feet to keep him up there. So they thought he was a Japanese Christian, and he, like them, was there to share an experience with the late Jesus, and thereby acquire some of his holiness.

Every action that they took, he took too. The only difference between them was the narrative inside their heads about the meaning of they were doing.