I was in Sarajevo on the 100th anniversary of the assassination of the Arch-Duke Franz Ferdinand. It’s a disconcerting experience, going past rakija bars at 8 in the morning, and listening to fat men in in their forties, in faded cammo gear, croaking out nationalist songs. That’s because you know that when they were singing those songs just 20 years ago, they were raping and torturing women and murdering men they’d put in cages so they couldn’t fight.

I spent much of the night talking with a woman about what it was like being a little girl in Sarajevo, with Serbs lobbing mortars at you and pouring sniper fire onto your school, when you’re five years old. Apparently it’s not scary at the time. It’s only when you’ve finished running, and you’re safely behind stone or out of range, that you start to feel the fear.

Kids shouldn’t know that sort of thing about fear. No-one should. But she told me this without any anger, which is one of the more amazing things about humanity. 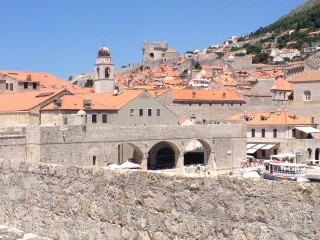 Anyway, the next night I was in Dubrovnik, in Croatia. A little after midnight I was on the terrace bar at the Hotel Imperial, looking down over the Adriatic and the old city. The old city of Dubrovnik is a walled Medieval town (see my picture to the left of this text). It’s been very skilfully restored after the Serbs – again – pounded it with shelling for three years.

There was a working girl there, in her mid-twenties, pretty and mostly well dressed. The way her skirt didn’t come down far enough to cover her stocking tops was part of her badge of office, as was her bag, and the walk. She was extremely good-looking, and by local standards I’m sure her rates were high.

I’m not a potential customer for sex workers, but not because I disapprove of selling sex. I disapprove of the mistreatment of sex workers, which happens most and worst in countries where prostitution is illegal. But in countries where prostitution is legal, and working girls and boys can organise, buy or rent their own premises, and hire their own security, and don’t have to pay off the police and organised crime, I don’t have any ethical objection. It’s about decent working conditions. 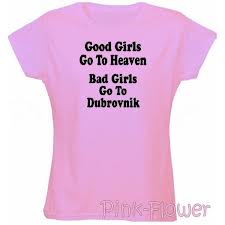 Anyway, I’ll tell the rest of this story tomorrow.