Gem and Jaime first met a year earlier. Gem had come to visit the mountains, not him, but mutual friends had asked Jaime if he’d provide a bed for a travelling stranger.

She arrived earlier than she’d arranged. It was early evening, and Jaime was, in a sense, in trouble. He’d agreed to meet a submissive woman at her home that afternoon. He’d liked talking to her, and had enjoyed meeting her in public. But in her house, he realised that she needed a full-time psychologist and social worker, and Jaime couldn’t be that. And, something that was actually more apparent when she dressed sexily, he didn’t find her very attractive. He liked her, but there was no lust. So he had to stop things in their tracks. He was having that awkward conversation, and feeling that he was both a fool and a shit, when Gem’s call came. She was at his house, she said, stomping her feet on his freezing verandah. Where the hell was he?

Gem was hours early, and she had no business expecting him. But though he might have called her on her foot-stamping performance some other time, her call was a welcome interruption. He told Gem how to let herself in, and that he’d be home soon. Then he told the submissive girl that he really was sorry, but he had to go. He left, feeling a mix of relief and self-disgust.

Gem turned out to be beautiful, with big eyes and exotic features. She was a trim girl in tight jeans and a red tee-shirt stretched over astonishingly generous breasts. Jaime had thought she looked like an artist’s impression of what a sexy girl would look like, except that she was three-dimensional. Spectacularly so.

He showed her her room and made dinner, and they talked over ratatouille and wine. He found that he was enjoying the evening and her company far more than he’d expected. 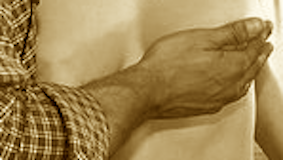 So he kissed her, and she closed her eyes and opened her mouth. A few seconds later, he was erect and cupping a hand round her right breast, which had pleasing weight and hand feel, and could not be contained in one hand.

Since she’d noticed and not disapproved of his erection, he’d moved her right knee further from the couch, and had begun to stroke her cunt through her jeans.

She closed her eyes again and whispered something, not words, and he knew she was his. He was going to undo her jeans when he saw something in her eyes. She couldn’t ask him to stop, her body wouldn’t let her do that, but he saw that she was unhappy with herself. So, because he’d hurt one woman that evening and he wanted to do right this time, he paused.

Still with his hand on her thigh – he didn’t want to be too fair – he said, “Gem love, there’s a bed. It’s really comfortable. Sheets, pillows, it’s brilliant. I want to take you to bed and fuck you. Because of the excellent sheets thing.”

“But … I’m only going to fuck you if you think that you’ll wake up in the morning feeling happy to be waking up with me.”

She’d spent more time apologising, and so Jaime had stroked her cunt one more time, both to stop the apologies and to enjoy the power that he had. Her eyes glazed, wonderfully. So he put Gem to bed, and kissed her, which became a sex-kiss again, until he managed to rip himself away from her.

This was what it must be like, Jaime decided, being a gentleman. He regretted it, lying alone in his own bed and hoping she’d come to him. He had to wank three times before he could finally sleep.

She was getting more and more sad, and so Jaime demanded that she come away with him to Rome. This time, he said, he wasn’t going to be a gentleman; he intended to fuck her and lick her and make her laugh by fair means and foul. If she agreed to come to Rome, she had to understand that: she was definitely going to be fucked. Gem came to Rome. 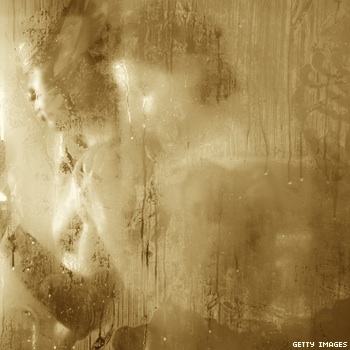 But Sunday morning has to come. Gem and Jaine are in the Hotel Victoria shower, naked together, but knowing that soon they’ll have to get dressed. They stand nose to nose, looking at each other. She seemed lighter and younger in her face and eyes than she was a week ago. He thought he’d done right, and done well.

But soon Jaime will have to check under the bed for underwear, socks, condoms and coins, go downstairs and pay the bill. They will take different taxis. He’d had to work hard to persuade Gem to come away with him, and he suspected that she wouldn’t allow it to happen again. They’d enjoyed themselves too much.