A hotel door: [a woman with a Samoan accent, amused by Gem’s shyness, and kindly]: Oh that’s okay, we’ll just do the other rooms and come back to this one this afternoon. There’s no hurry; take all the time you need.

[There’s the sound of a hotel cart being wheeled away from the door.]

[She seems a little disappointed. Jaime realises that she’d been not only expecting something more embarrassing – she hadn’t spent all that much time fucking in hotel rooms – but in a sense she’d been hoping for it. Also, she’d accepted his hand on her ass, not gentle, when he wanted her obedience. Even now, with the pause after the cleaner gone, she bore his handprint on her buttock and hadn’t thought to complain. Jaime pushes forward, letting his cock wetly fill her, till his belly is against her rounded ass.] 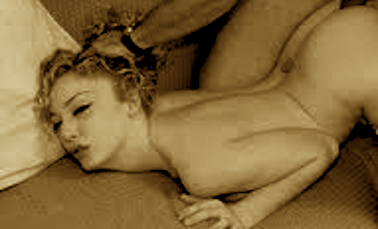 [Jaime slowly withdraws his cock, but can’t resist burying himself in her, deep as he can, one more time while Gem burbles.]

[But this time Jaime withdraws entirely.]

Gem: [not noticing his voice, reaching back for his cock] Come on, please.

Jaime [puts his hand on her spine to stop her getting up. Still the command voice]: Gem.

Jaime: Gem, you were told what to say. Weren’t you? [He doesn’t wait for an answer.] But you didn’t do as you’re told.

Jaime: Only when I smacked you, Gem. Do you think that woman heard you? Having to get your bottom smacked, because you didn’t do as you’re told?

Gem: Oh. Oh god. [There are goose bumps on her shoulders.]