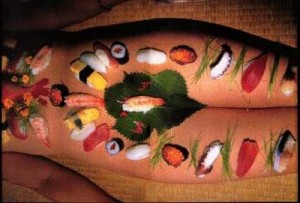 The word for serving sushi on the body of a naked woman is “nyotaimori”. Oddly enough, it’s a Japanese word…

I fell asleep too, waking when Chloe rose at midnight to have a shower. She was a pale girl, who glowed in moonlight like a ghost. But her arse and upper thighs were dark and almost invisible.

I put together sushi and cucumber from her fridge, and poured wine, demonstrating my committed opposition to patriarchal oppression, et cetera, which I tended to do after delivering any sort of thrashing.

(That was then. My level of service to submissives has deteriorated, I’m afraid.)

Chloe’s buttocks and thighs, when she returned from the shower, were much cooler and, disappointingly, already much paler. But she still chose to lie facedown on her couch while I hand fed her sushi and held her glass to her lips.

I told her how much I’d loved her game, saying to her some of the things I’ve written above. In return Chloe told me that the strap had hurt, certainly, but except for a couple of the lashes – like so many people with our desires, she liked the feel of words – where I’d misjudged my aim or the force of the swing, it had been a satisfying hurt.

She liked its leathery weight, the way it impacted and kept a warm buzzing in her skin until the next lash. Somewhere around the twentieth stroke she’d stopped caring about individual impacts. Her whipping became a continuous experience that included but did not focus on the strap landing across her bottom; it flowed, building up heat, intensity and the deep, sexual sort of pain.

And she’d liked being commanded. She’d determined in advance that she would do whatever I said, so that in the moment she could feel, helplessly, that she had to obey. She wanted us to do more of that. Just in play, of course, she said: try it outside this room, and I’ll kick your balls in …

I let that pass.