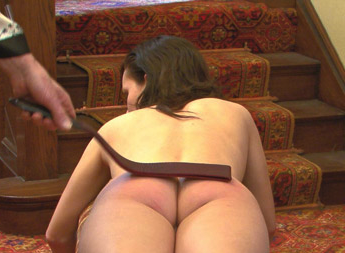 Raylene, leather and some stairs

It’s time to continue the story of Charmie. Like most stories I try to tell briefly, it’s grown into a saga. I posted the most recent episode back in October 2015.

But the story started with us meeting in Charmie’s kitchen, back in episode 1. That appeared in October 2014. So this is a long story.

You can read all 66 episodes so far, by buying the ebooks:

Governing the Gang Girl 1: The Heat in the Kitchen

I recommend buying those books. Of course I’m biased, but there’s some hot stuff and some interesting stuff there. Here’s a brief outline of the story so far.

The story so far

The saga was originally called “Humiliation of an ex-Nazi submissive”, which was the most click-bait-y name I could think of. But it was also true: Charmie had spent a year or so with a neo-Nazi gang, to punish her mother for getting a new boyfriend. Charmie did come to her senses and get out of there, but when I met her she was still pretty raw from that experience. That explains one part of the title.

And while she’d been running with the boot boys she’d done some very bad things. She felt bad about them, and in a different way so did I.

I began by whipping her ass with a razor strop on the stairs that led up to her bedroom. The odd thing was that when Zerlina, her sister and her friend Lynette turned up unexpectedly during that flogging, Charmie hadn’t run for her room to save herself embarrassment.

Instead she stayed in position, naked and spectacularly red-arsed, while I talked to her sister and her sister’s extremely disapproving friend. Charmie only got up when I ordered her to go to her room and wait for me. She’d wanted her sister, and maybe Lynette, to see that she was getting whipped and that she obeyed orders. And that she addressed me as “sir”. It was an important statement, that had little to do with me.

So when Charmie had disappeared into her room I talked to Zerlina, who’d had a thing with me a couple of years back. She knew I was a pervert, though she’d turned down the wondrous possibilities that offered her. I also talked to Lynette, who’d hated me from the second she saw the state of Raylene’s bottom and thighs.

Anyway, the outcome was that they’d go out for a while, then come back and make dinner while we, er, got things out of our systems. When they’d left I’d joined Raylene in her bed. Things that happen between a Dom and a woman who likes Doms happened between us.

But at a moment when I had my cock in Charmie’s throat, and the need to come in her, Zerlina and Lynette returned. Zerlinae pounded up the stairs, partly out of mischief and (though she didn’t say so) partly to check Charmie was ok. She offered us a cup of tea.

Charmie still had my cock in her mouth, and all my attention. I told Zerlina to go away. But Charmie signalled, with her mouth still dutifully, beautifully full, that she would, in fact, quite like a cup of tea. If one was going.

So I ordered tea for two. That’s where the story has got to. There’s more, and it’s sexy, and it happens to real people.