Seamus faced his class again. No one met his eyes. He spoke quietly for the rest of the class, so they had to be silent, and there was no further mention of disciplinary matters except for occasional sniffs from Yua, in the corner, hands on head, her bottom no doubt sore after her caning. 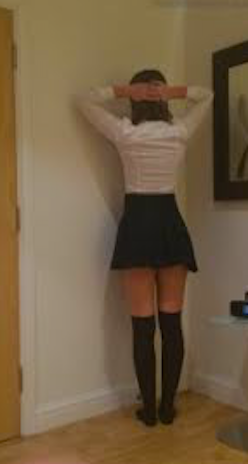 All was peace until the whistle sounded and the class filed out, some of them glancing at Yua, still standing with her nose to the wall. The skirt covered the three bright stripes that had to be there, where he’d caned her.

When the room was empty, Seamus said, “Yua.”

She walked towards him in little steps, head down. She stood by his desk, silent. Seamus remembered something that his friend and fellow teacher Amida had told him about punishing students in private. Most of the girls would lift their skirts and take down their panties, if ordered. Seamus expected she’d be very cooperative. Still, that was probably too much, for now.

On the other hand, he did think he’d let Yua off too lightly. So he said, “I expect you to do last week’s homework and next week’s, and to give them to me at the start of class next week. Is that understood?”

“You know what to expect if that work is less than excellent. I know very well that you aren’t stupid. Even if your excuses have been stupid. So you’re going to stop pretending to be a dummy, and give me your best effort from now on. Is that understood too?”

She bobbed down a little, twisting the bottom of her skirt. It looked like it might be anguish, but it also showed him more of the tops of her thighs. “Of course, O’Grady-sensei. I’m so sorry.”

But when she smiled at him then, it came too easily and too cheerfully, and Seamus decided. The decision was not in her favor. “Good. Now go into the storeroom, Yua, and wait for me. I am not finished with you.” 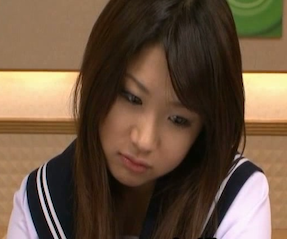 She lost her smile immediately. But she turned and obeyed. Seamus let a few minutes pass before he followed her, wondering about what she was up to. He was going to give her more strokes of the cane, of course.

She deserved them, so it was, arguably, his duty. He wasn’t going to do anything sexual with her.

Or not directly sexual; she was a very attractive woman and he already had an erection. He could feel the press of his own clothes against his cock, like sweet pain. There was no doubt that he’d be even more aroused when he caned her, and something about her performance after the three strokes he’d already given her suggested that she might be too.

But she’d gone out of her way to deserve her extra stripes, in a school in which corporal punishment was common. She must have known what she was doing. His abstention from school custom, in relation to corporal punishment, had only stood out, so far. It made him weird, not admirable.

He suspected all of his classes would do better work in the coming weeks if he gave Yua a proper tale of woe to tell and some painful-looking marks to show the other girls. Besides, he remembered, he’d borrowed his cane from Amida, and he’d promised to tell him how he’d used it. He hadn’t wanted that story to be about Asuka. So it would be about Yua.

He picked up the cane and followed Yua into the storeroom.

8 thoughts on “Wicked Wednesday: In the Realm of the Sensei 14”